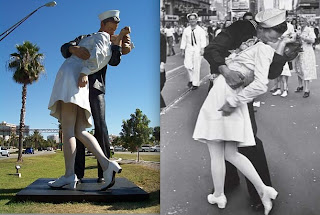 It's one of the most famous photographs of all time. V-Jay Day in Times Square by Alfred Eisenstaedt appeared in Life magazine a week after Japan surrendered in 1945. The black and white picture shows a young sailor passionately — and spontaneously — kissing a nurse. The contrast between the dark and light of their uniforms, as well as the way their bodies curve together and around each other has led some skeptics over the years to ask whether the scene was staged. In the decades since the war ended, multiple men and women have come forward claiming to be the subjects.
Today, in Sarasota, there's a 25-foot sculpture of the kiss by John Seward Johnson II, aptly titled Unconditional Surrender.
When my in-laws picked us up at the airport on our recent visit, they made it a point to drive by this impressive piece of public art on the way to Long Boat Key. Of course, my husband and I recognized it immediately. But, my daughter was confused.
"It's awk-ward," she said at first, singsonging the word's two syllables. For those of you who don't have a tween, the word "awkward" doesn't always mean clumsy or difficult to deal with. These days, it means exposed. Like someone who arrives at middle school and doesn't realize that their underwear is showing. Or someone who posts how they feel about a crush and then the crush in question happens to see the post. Awk-ward!
Of course, there were four full-grown adults in the car, eager to explain the statue and what it meant. My in-laws were just kids during World War II, but certainly aware of what was happening overseas. They remember V-J Day firsthand, as I'm sure my own mother does. And, in all fairness, there are likely more retirees in Sarasota County than tweens.
"It was an amazing day because the war with Japan was finally over."
"During World War II, practically everyone had a brother or son or husband fighting overseas."
"People were celebrating in the streets all over the country."
But, my daughter wasn't buying it, and our conversation moved on to details about our flights and the latest family gossip. A few days passed.
The next time we drove by the statue, we were on our way back from a field trip to the Ringling Museum. There were tourists taking pictures at the base of the statue, some hamming it up for the camera by adopting the iconic pose. We drove on.
The last time we passed by was on our way back to the airport. This time, my daughter made a declaration, "I don't like it." I asked her why, and she explained that the sailor had no right to kiss the woman. He didn't know her. You can't just attack strangers in Times Square. She's obviously not embracing him back. Duh.
"And, look at his left hand. He's making a fist."
I took a closer look at the image. My daughter was right. The sailor is holding the woman with one hand around her waist and the other under her neck with her head resting in the crook of his elbow. His hand is clenched into a fist.
And, what of the so-called surrender? The nurse's right leg is raised in what a young Anne Hathaway called a "pop" in Princess Diaries. Hathaway's awkward (as in, clumsy) Mia was hoping that her foot would pop when she shared her first kiss. But the figure in the sculpture, as well as the mystery woman in the photograph, may just be caught off balance.
I know the original photograph, and a similar image of the same unidentified models captured by U.S. Navy photo journalist Victor Jorgensen which ran the next day in the New York Times, is near and dear to so many people's hearts. In fact, I believe that the majority of the retired sailors and nurses who have claimed to be the people in the picture actually believe they are. The day and image are burned into the collective memory of the greatest generation and its baby boomer descendants.
But, my daughter brings up a good point. At age thirteen, she's living in a world where only some people in our country are at war. She doesn't have a relative or friend serving overseas, and she cannot relate to the mass jubilation her grandparents lived through 66 years ago.
And, she has been taught that she owns her body and that no one is allowed to touch it without her permission.
Whether they've just won a war or not.
Posted by Alexandra MacAaron at 6:07 AM