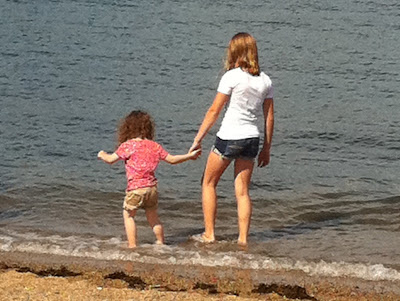 I've always joked that running an ad agency creative department is a lot like babysitting. You have all this energy that needs to be focused. You have to make sure everyone feels safe and appreciated and loved. Sometimes you even have to deal with tantrums. And, your success rate is much higher if you bribe your charges with chocolate.

No wonder I've done so well in my professional career — I began training for it back in sixth grade. And, my daughter is now following in my footsteps.

In my tween and teen years, I had many many many babysitting gigs. Friday nights, Saturday nights, weekdays after school. There were newborns, toddlers, identical triplet girls and a pair of terrorist brothers. I took my job seriously. In fact, family lore recounts a time, when as a very self-important thirteen year-old, I informed my grandmother that babysitting was "How I make my living."

It was certainly a win-win. I enjoyed the kids, and once they went to bed I had my choice of snacks, a nice quiet place to do my homework and complete control of the TV. On top of all this, I was being paid. My clients seemed to like me and I was always pretty busy. But in truth, they didn't know how lucky they were!

According to Huey Lewis, "It's hip to be square." Well, back in 1976, I don't know that I was hip, but I was certainly square. Reread my description of the benefits of babysitting above and you'll note some potential attractions that are conspicuously absent. I did not make endless calls on their phones. I did not avail myself of the contents of their liquor cabinets. I did not invite my boyfriend over. (All right, this was partly because I didn't actually have a boyfriend until spring of senior year. Definitely square. But, it's mainly because I was an extremely responsible girl.) Parents expect babysitters to behave, but among my friends in New York City in the seventies, there was a lot of bad behavior. At least one of my girlfriends lost her virginity while she was sitting (the 'whos lay a-snooze,' by then of course). But seriously, talk about lying down on the job!

Many of the local eighth grade girls are busy babysitters these days. But between riding lessons multiple times a week and the fact that we have very few family friends with young children, my daughter has had less opportunity. She is well-prepared though. She has her babysitter certification from the YMCA and Red Cross, and this past year she was certified in CPR. She is better equipped to handle an emergency than I am.

This past week, she got a chance to test those skills — the general babysitting skills, not the CPR, thank goodness — with not one but two major jobs. The first was watching eight (count 'em, eight!) boys (boys!) while their parents went on a wine-tasting harbor cruise. She did have a partner, a good friend and daughter of one of the tasters. But, even if you divide the charges in half ... that's a bunch of boys! With the parents' permission, the entire motley crew went to a nearby fort to play. Thank goodness for cell phones; the two sitters were able to text each other with continual real-time headcounts.

The second engagement was for friends of ours who have four- and ten year-old sons. We took the opportunity to add to the mix our little niece who was visiting from New York and a bit overtired. It was billed as a "playdate," but we weren't sure of our success until we walked in later and found all the children playing "Angry Birds." Technology to the rescue once again.

My daughter is really good with children, and she's smart and responsible. Well, not so much about making her bed, maybe, but she's responsible when it really counts. She came home from this intense initiation a bit worn out but satisfied, I think, with her job well done. Then again, maybe the satisfaction was due to all the money she earned: $80! Can you believe it?

My clients paid $1, $1.25 or in the case of one particularly flush family, $1.50 an hour. The going rate here today is $10 and up. I suggested to my daughter that she won't need an allowance anymore.

She suggested I was wrong.
Posted by Alexandra MacAaron at 7:51 AM