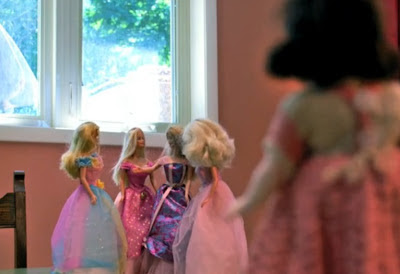 There was a funny informal game we used to play in the car. I call it, "What made you think of that?" Basically, if one of us came up with something that seemed to be out of the blue, the other could demand to know the train of thought that led us there.

For example, on a drive to New York:

Me: "Did you know that you have to remove male hamsters from their babies because they'll eat them?"

Him: "What made you think of that?"

Him: "That must have been pretty traumatic for you guys as first graders."

Me: "Not as much as you'd think. We all drew pictures, but we ran out of red crayons."

This is a true story. But, not (thankfully) the main point of my post.

A few days ago, I experienced another set of non-sequitorious events that led to an unexpected discovery. To recap quickly for you:

I am a big fan of Downton Abbey. I was intrigued by the preview that was released for season three of said mini-series, and particularly taken by the women's choral group that sings in the background. A little research led me to the Belgian choir Scala & Kolacny Brothers. I bought one of their CDs (yes, to my teenage daughter's chagrin, I do still purchase discs). There was a haunting rendition of Radiohead's song "Creep" on the CD. I was killing some time, waiting for my daughter at the stable, so I Googled it and found this video.

I always knew Barbies were evil and now there is videographic proof. In this short film, a supposed "plain jane" (in truth, a lovely Madame Alexander doll) is enthralled by a group of shapely blondes. She is desperate to be accepted, so she mutilates herself — literally removes her head and puts it on a discarded but statuesque doll body. At first, it seems to have worked. The clique of "so f*cking special" girls appears to welcome her. But, no! In an act of Greek tragedy proportion, they tear her limb from limb and throw her from a cliff (or at least from a kitchen table). As the song ends, our pathetic heroine closes her doll eyes for the last time.

The not so subtle message here is that you should never change yourself to fit in with others. That beauty is only skin deep. (And, that blondes may have more fun but you should probably stay clear of them if you want to remain in one piece.)

I think it's really unfortunate that between Barbie dolls and Victoria' Secret, our society offers a fairly impossible standard of beauty for our girls to aspire to. Estimates vary, but if Barbie were a real woman, she would be 6-7 feet tall, weigh about 100 pounds and have measurements along the lines of 36-18-38. (That waist, BTW, would make her 35% slimmer than a typical anorexic.) In Mattel's defense, they did once launch a more realistically proportioned doll. It didn't sell.

Based on the figures above, no mere mortal woman could ever achieve a truly Barbie body. And, what about girls who are naturally petite or muscular or stocky or flat-chested? Are they judged by standards that relate to their own anatomy? Or are they judged by how far removed they are from this ridiculous plastic ideal?

That's why I'm going to show this video to my teen daughter and encourage her to share it. As far as I know, none of her friends have actually attempted a head transplant yet. But, we've already heard about crash diets that sound frighteningly like eating disorders, and girls who are saving money for nose jobs and — yes — boob jobs.

The song is called "Creep" and the title comes from the narrator's self-assessment. But, the video's story and unhappy ending are grounded in a very real observation about self-destructive self-image and its dire consequences.

To this mom, that's really the creepy part.

Posted by Alexandra MacAaron at 6:52 AM