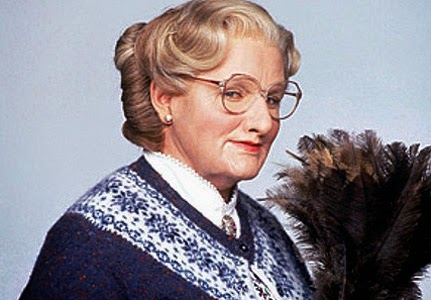 I have more than 500 friends on Facebook. (I guess, technically, I should say "more than 500 Facebook friends" — the meaning is slightly, but significantly, different.) It's rare that all these people agree on anything. But, last night and this morning, they did. Everyone I know is mourning the loss of Robin Williams.

From his frenetic standup comedy to his heartfelt dramas, from Mork to John Keating, from Aladdin's Genie to Dr. Maguire, he showed us unparalleled range as an actor. He touched everyone. He was so generous with his gifts, yet suffered from addiction and depression.

For me, he'll always be Mrs. Doubtfire.

I saw the movie in the theatre when it came out. The following year, my husband's company was acquired by Rupert Murdoch and the "goody bag" we received, welcoming us to the Fox family, included a VHS tape of it. About a decade later, my daughter discovered the movie at a ski house we had rented. She was thrilled to learn that we owned a copy and preceded to watch it. And watch it. And watch it.

The tape wore out long ago, but — happily — Mrs. Doubtfire is on fairly frequently. I always stop whatever I'm doing for a few minutes when I stumble upon it. There's so much to love — his transformation through the make-up mastery of brother Harvey Fierstein, how he tries to sabotage his wife's would-be suitor Pierce Brosnan, the inspired use of Aerosmith's "Dude looks like a lady." And all the brilliant lines that we always assumed (we just knew!) Williams must have improvised on the spot.

By far, my favorite part comes at the very end. Daniel has finally found success with his own public television series. He and his ex-wife have reached a peace, and he's reunited with his beloved children. As Mrs. Doubtfire, he reads and responds to a letter from a young viewer.

I can hear his voice, clear as day. It was this combination of tenderness and humor that remains uniquely his. He could bring us to tears even as he made us laugh until our sides ached.

“Dear Mrs. Doubtfire, two months ago, my mom and dad decided to separate. Now they live in different houses. My brother Andrew says that we aren’t to be a family anymore. Is this true? Did I lose my family? Is there anything I can do to get my parents back together? Sincerely, Katie McCormick.”

Oh, my dear Katie. You know, some parents, when they’re angry, they get along much better when they don’t live together. They don’t fight all the time, and they can become better people, and much better mummies and daddies for you. And sometimes they get back together. And sometimes they don’t, dear. And if they don’t, don’t blame yourself. Just because they don’t love each other anymore, doesn’t mean that they don’t love you. There are all sorts of different families, Katie. Some families have one mommy, some families have one daddy, or two families. And some children live with their uncle or aunt. Some live with their grandparents, and some children live with foster parents. And some live in separate homes, in separate neighborhoods, in different areas of the country – and they may not see each other for days, or weeks, months… even years at a time. But if there’s love, dear… those are the ties that bind, and you’ll have a family in your heart, forever. All my love to you, poppet, you’re going to be all right… bye-bye.

Robin Williams will be in our hearts forever. And, we're going to be all right.

Bye-bye.
Posted by Alexandra MacAaron at 11:37 AM