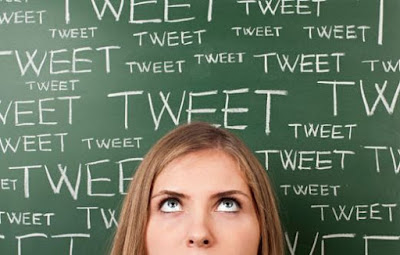 That is the question. Or not.

I'm on Twitter. (Aren't you impressed?) In fact, I'm so on Twitter that I have three separate Twitter accounts. One for my business, one for my cultural pieces (my weekly column in Women's Voices for Change), and one for this blog.

I even have followers!

But, the fact that I have Twitter accounts and actively tweet (when and only when I have something legitimate about which to tweet, mind you) does not make me an expert "Twit."

Not by any stretch of your — or my — pre-millennial imagination.

Did you know, for example, that there is an entire glossary of new words that have emerged from the Twittersphere? These are very helpful to memorize if you want to impress your peers or people older and less wired.

Been there, done that.

So, just between us old folks, here are some terms that you may find interesting, amusing, or just plain ... well ... useless. (Don't say I didn't warn you.)

Attwaction - When two Twitterers are attracted to each other

Mistweet - A tweet you shouldn't have sent (see "Dweet")

Tweekend - When you spend an entire weekend tweeting

Twitterphobia - An irrational fear of tweeting

Twitterphoria - The elation when your tweet just nails it

You may not have a Twitter account. You may not tweet. But, the next time you find yourself at some fancy social event with the twitterati, at least you can feel confident about being up on the latest slang.

Because now, you're a twenius too.

You can thank me later. Better yet, follow me. ;)

If you've enjoyed this post, I invite you to order the book Lovin' the Alien here.

Posted by Alexandra MacAaron at 3:29 PM