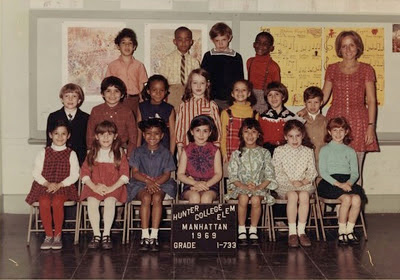 I can't help it. Simon & Garfunkel songs keep playing in my head.
"Can you imagine us years from today,
Sharing a park bench quietly.
How terribly strange to be seventy.
Old friends ..."
Seventy. Wow. Right now, I can relate to that number.
No, I haven't aged twenty years (twenty years and five months and eight days, to be exact) overnight. But, those lyrics keep repeating themselves. I just returned from a quick trip to New York to attend the seventieth anniversary celebration of my elementary school.
What a time it was!
Trips like these are best made alone. Would I enjoy showing my old school to my husband and tween daughter? Yes, very much! Would they enjoy it? No, not so much. So, they stayed home and I journeyed south by myself.
Most of us remember our grade school years with fondness. Best friends, favorite teachers, recess. My memories include all of these things, of course, but my school itself was unusual. It was established (seventy years ago, if you've been paying attention) as a teaching lab for college students. Although it is not a private school, it has always been part of New York's higher education system rather than part of the public school system. Over the years this has created challenges as the City has struggled with budgets. We were evicted from three floors of Hunter College back in 1971, spent a spooky year in an old convent, relocated to the U.N. School's former building, and finally found a permanent home in an armory on Park Avenue. I clearly remember my mother and all of the mothers of my friends marching down to City Hall with handmade signs and banners. "S.O.S. Save Our School!" we chanted.
Many years later, a handful of my fellow protesters and I reconnected to celebrate what made our school so special in the 60s and 70s.
After a quick tour led by an extremely articulate fourth grader, we attended an assembly. Emceed by three sixth graders, the program included songs in both English and Spanish. We joined in to sing the Alma Mater that we remembered, and some guests from earlier classes taught us a couple of lost versions. Throughout the day, young students were happy to share their space with a bunch of sentimental old folks. They seemed truly delighted to meet us. Later, we gathered at the historic home of Eleanor Roosevelt for a reception and a presentation honoring several distinguished alumni.
Our class produced a respectable turnout. Although as far as I remember there were equal numbers of boys and girls in our grade, only women attended from the "Class of '74." (I confess I had to look at my name tag every time anyone asked my year — I'm used to referring to my high school or college graduation, not sixth grade.) There were decades to catch up on: careers, marriages, divorces, where we went to college or graduate school, where we live now.
As we talked, years melted away. So, you might not recognize someone at first, but within minutes, you could see them exactly as they were at ten years old. "Oh, there you are!"
We talked a great deal between Friday's program at the school, the reception that night, and brunch the next day. And what topic did we talk about most (and return to again and again and again)? Our children.
My best friend from first grade has an only child as do I (her son is the same age as my daughter — we agreed that these years are tough although there are definitely pros and cons of each gender). Another dear friend has two daughters who look so much like the girl I remember that I catch my breath when I see their pictures. One brought her sixteen year-old with her — and, either she is an extraordinary actress or the young woman was genuinely interested in all of us. (Either way, she was delightful.) Some people had grown children; some were navigating college applications. And, the classmate who wins the "family-life-most-likely-to-be-made-into-a-movie" prize was my beloved BFF from fourth grade (we wrote a book together that year and produced many wild theatricals). She has recently remarried, merging her four children with her new husband's eight. That's like two Brady bunches in one household! (Where's Alice when you need her?)
Regardless of the size of each of our families, they became an instant reconnection for us. We compared notes about our children, their schools, their after-school activities, what the older ones were doing for a living or majoring in. When we ran out of shared second grade memories, we could count on the common ground that came with guiding a next generation through its own trials and tribulations. (Dodge ball, anyone? It was the bane of my elementary school existence. I still shudder when I think about it.)
The anniversary event ended too quickly and we scattered back to our grownup lives. But, I will treasure the pictures I took and the new memories we made.
Maybe you can't go home again. But, sometimes, you can visit for a little while.
Posted by Alexandra MacAaron at 2:08 PM