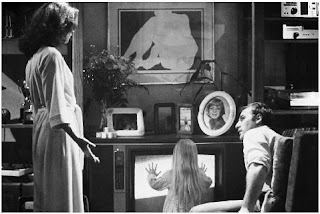 
So do I. Well, not so much in ghosts, per se. Not gauzy figures in shrouds that come back from the beyond to seek revenge (or simply haunt their old haunts). But, I do believe that there is unearthly energy that can make things happen.


My sister and brother are both psychic and have had many supernatural encounters over the years. I happily was spared this particular talent. Even when I was a teenager, despite an awful lot of slumber parties with an awful lot of Ouija boards, I remained gratefully ghoul-free.


So it was a surprise when I had my first spirit-ish experience. Several years ago, my husband and I went to a realtor's "Open House" at an antique home in our neighborhood. It was a wonderful place, with good-sized rooms, a generous backyard, a private deck and an updated addition that I could have used as an office. But, from the moment we went in, I just knew there was something (or someone) else in the house. I just knew I wouldn't want to live there.


Recently, I learned that the mother of one of my daughter's best friends grew up in the house. She confirmed that it was — indeed — haunted.


You have to figure that a town like ours, established in the 1600's and with plenty of colorful history (drowned sailors, an abandoned fort, pirate attacks), would have its share of ghostly residents. But, I never felt anything in our current house — despite its nearly two hundred year-history. Until now.


Poltergeists (from the German poltern "to make noises" and geist "ghost") are typically mischievous incarnations who hide things, break things, and generally go bump in the night. They aren't technically the spirits of the dead. But, they do tend to "haunt" preteen and teen girls. Many believe that the unexplained events are actually caused by the adolescent girls themselves, all that angst and energy manifesting itself in mysterious ways. Paranormal psychologists even have a technical term for the phenomenon: RSPK or recurring spontaneous psychokinesis.


We have a (sometimes terrifying) fourteen-year old girl; she certainly has angst and energy to spare. And now, I firmly believe, we have a poltergeist. To quote a different movie, "They're he-ee-re."


It started earlier this week. I was going through my usual morning routine, putting on sweats and a tee shirt for my daily walk. I pulled out the three earrings, two (faux-bulous) diamond studs and a tiny gold hoop, that I always wear. (Between my extremely short hair and no make-up, I feel a bit too butch when I workout without some jewelry.) Then, I went up to my office to print my daughter's English essay. Then, I went back downstairs to the kitchen to make her lunch. Then, I noticed that the earrings ...


I traced and retraced my steps. (As a confirmed control freak, losing things drives me crazy.) No earrings! I went off on my walk anyway. About thirty minutes later, my husband called my cell to say that he had found them on his night table. Did I leave them there accidentally? Am I becoming absent-minded now that I've hit my fifth decade? Or, do we have a poltergeist? I think the latter explanation is much more interesting, so I'm sticking with it.


Then, yesterday, I had to get dressed up for a meeting with a client in Boston. I pulled on a pair of black rayon trousers and a funky African jacket. Some chunky jewelry, a spritz of perfume, and I was all set. Until, I realized that my shoes ...


In a famous ghost story, Ebenezer Scrooge asked Jacob Marley, "Why do spirits walk the Earth?" I don't know. But, why would a ghost want to hang around a teenager? I think I can answer that one.


Maybe they are naturally attracted to the only thing scarier than themselves. Think about it.


And, one more thing ... my shoes are still missing.
Posted by Alexandra MacAaron at 3:39 AM