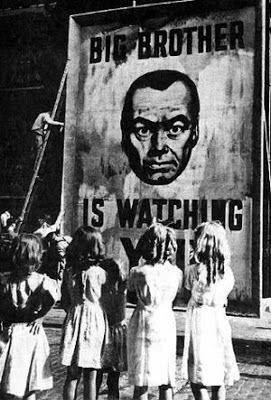 When my now teen daughter was little, we often took "discovery walks" around our historic town. We played a version of "I Spy" and found all sorts of things. Sometimes, we would spot a sad, hand-made sign alerting us to the fact that someone's beloved dog or cat was lost.

This would, of course, seem like a tragedy to my daughter and I would reassure her that chances were, Fluffy Poo-Kitty was either on an exciting adventure with her feline friends or more likely already safe and sound at home again.

(I think I've already made my position on stretching the absolute truth clear in a previous post.)

About this time, my ad agency did some creative work for a chain of veterinary clinics. Did you know that one of the most profitable products they can sell their patients' families is microchipping? This simple process involves inserting a minuscule microchip under the dog or cat's skin. If the animal is found by the police, it can be traced back to its owners. Happy ending all around.

Well, teenagers are neither dogs nor cats, my friends. And, I was disturbed to read about a program currently being implemented in Texas, called the "Student Locator Project." No, kids are not being surgically microchipped (at least not yet), but they are being forced to wear new student ID's that have RFID, radio-frequency identification, devices built-in. This technology will track the location of each student. Like a GPS system or a homing missile.

Apparently, the state has an enormous truancy problem. Also (apparently), the state has been less than successful dealing with said problem. So instead of cracking down on the offenders, they are now planning to track all students, all the time. In some schools, students who select not to wear the new devices are not allowed to vote for Prom King and Queen. In others, they are being threatened with expulsion.

Many students, parents and community leaders have issues with this new policy — and for good reason. Isn't 1984 required reading anymore? Sure, Lindsay Lohan had to wear a tracking device. But only after she broke the law multiple times. Whatever happened to privacy? Whatever happened to innocent until proven guilty?

My daughter came home from her first week of high school, astounded by the lack of supervision. "It would be so easy to ditch!" she told me. After two years of virtual lock-down in middle school, the freedom was intoxicating. However, she isn't cutting classes. She and her peers are young adults and they are choosing to pursue their education. Besides, I believe that if their goal really was to skip school, no newfangled "smart chip" ID would hold them back. Meanwhile, they are being treated with respect and afforded the same degree of privacy and free will that this country guarantees its law-abiding citizens.

Okay, so if individuals' rights are not your concern, let's consider the logistics for a minute. The policy means providing hundreds of thousands of students with state-of-the-art technology. In the San Antonio school district alone, the program is anticipated to cost $526,065 the first year and another $136,005 per year thereafter. You can't tell me that there aren't better uses for these funds.

Here's an idea. What if that money was invested in enrichment or counseling programs for at-risk students — y'know, the same students who end up truants. Wouldn't the results be better all around?

Yesterday afternoon, my daughter went to the movies with some friends and afterwards hung out with them, at another girl's house and then at a frozen yogurt place. She "forgot" to call and tell me. As much as I would like to know where she is at any given time, I'm not going to put a GPS tracker on her mobile phone. And, the last time I checked, microchipping a human being is still the stuff of science fiction. My daughter is not my property. Those teenagers in Texas are not the property of the state.

High school should be a place where you get to practice being a responsible citizen. Not where you are treated like a convicted criminal.


Posted by Alexandra MacAaron at 6:53 AM