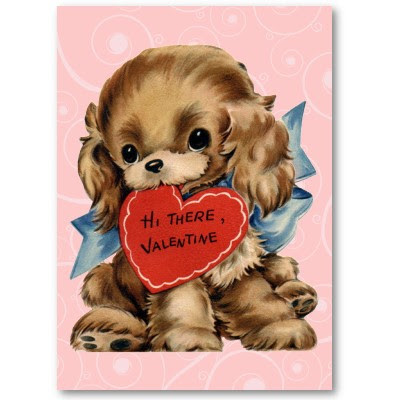 Roses are red,
Violets are blue,
If it has sentimental value,
I'm keeping it too.

I'm a notorious pack rat (although, for the record, I prefer the term "archivist"). I have every English paper I ever wrote from seventh grade on. I have my Girl Scout badge sash. I have dozens of photo albums, postcards and love letters (most of them are from my husband).

And, being a devoted mother, I have all of the valentines my daughter has ever given me.

These include many one-of-a-kind masterpieces of the homemade grade school variety. Some are cut-outs, some have pictures, some have doilies glued on, many have spelling ... um ... imperfections. There were a couple of years in preschool when my daughter wrote in perfect mirror writing. At a conference with her teacher, I asked about it.

"Is it because she's left-handed?"

The teacher looked puzzled for a minute. "Is what because she's left-handed?"

"She writes backwards?" the teacher asked.

I pulled out everything (I mean everything!) my daughter had done in class for the past year and showed her. The woman laughed.

"Oh, I don't even notice that anymore. They all do it."

Let me digress for a moment and point out that writing backwards is no easy task. (Unless you're Stanley Kubrick. Redrum, redrum.) For the record, my daughter who is nearly fifteen-and-a-half now, did outgrow that particular gift.

But she is happy to be a nonconformist in other areas.

One year (second grade maybe?), the teacher had the kids create individual mailboxes in which they would collect valentines from their classmates. The assignment was to build them out of different geometric shapes. My daughter was going through a horse phase at the time (oh wait! that wasn't a phase ...), and she was quite determined to create a horse mailbox. We used an up-ended shoe box (rectangle) for the equine's neck and taped an oatmeal box (cylinder) to the top for the head. We cut a slit in the circular bottom of the oatmeal container so that kids could sort of "feed" the horse their cards. Then we covered the whole thing in kraft paper, glued on folded ears, googly eyes and a yarn mane. It was a great success, and it's on display in her bedroom today with that year's valentines still in it. (Now that I think about it, I should probably check inside. There may have been some lollipops and conversation hearts in there. Hmmm ... Wonder what the statute of edible limitations is on those?)

It's been a while since I've had a homemade card, but in honor of Valentine's Day, I'm creating something special for my sweetheart of a daughter. A poem.

Roses are red, violets are blue,
Someday, you'll have a teenager too.
Pansies are pink, carnations are white,
Once in a while, you'll probably fight.
Daisies are yellow, grasses are green,
You'll come and say, "Mom, now I know what you mean!"
Marigolds are orange, planted in a row,
And I'll try not to say, "I told you so."

Happy Valentine's Day to you and your alien.

Posted by Alexandra MacAaron at 9:47 AM