Why Is This Boy Smiling? 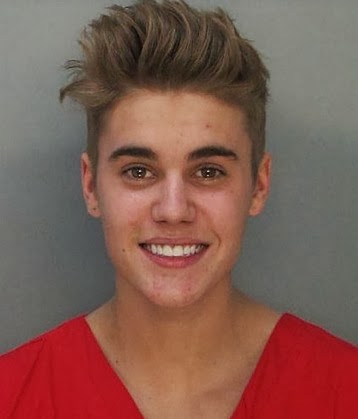 A lucky paparazzo once earned $250,000 for a shot of Brad Pitt and Angelina Jolie on vacation in Namibia. (Interestingly, "Brangelina" had already turned the tables on the celebrity photo business back in 2006 when they sold their own photos of their newborn to People for $4.1 million.) Stalking and shooting and selling famous people is big business.

But, I have a feeling that whoever took today's hottest picture of a star didn't make quite that much. Google "Bieber mug shot" and you'll come up with 9.2 million hits.

My teenage daughter was never a big fan (a "Bieber Fever Belieber Believer" or whatever Justin's groupies are called). Sure, we watched the tribute Glee episode together, but otherwise, she could take him or leave him. So it isn't as though we're emotionally vested in the young man's health and well-being. Still, every time these stories pop up in my Facebook feed, I get a little more disgusted.

Let's take a quick look at some of Bieber's accomplishments, shall we?

Bieber is the youngest recording artist ever to have five number one albums.

His "Baby" made history as the top-selling digital single, receiving Diamond status by the Recording Industry Association of America after going platinum twelve times.

Whether you like his particular brand of pouty pop or not, the boy has proven himself from a sales perspective. He's a big thing with lots of fans (63,695,453 on Facebook alone). And, based on his most recent ... er ... accomplishments, he truly does "believe" in all his own hype. For example, and this is all within the last month:

Bieber is under investigation for "egging" his neighbor's house, causing $20,000 in damages (all right, how big were these eggs?).

When the police arrived to search his house, they found drugs. They originally said it was cocaine, but it appears that it was only a form of ecstasy known as "Molly." (Phew, what a relief.)

And he wonders why she's off-again?

Earlier this week, he visited a number of strip clubs in Miami to distribute 75,000 $1 bills. And this morning, he was arrested.

My, my they do add up. Today's stunts comprise their own list. Let's see, illegally drag racing. Driving under the influence. Resisting arrest. "What the f*ck are you doing?" he demanded, prior to being cuffed. Apparently, he has decided that he is above the law.

So what's next for young Justin? A new haircut maybe? Another number one album? Or a continued spiral down? Things don't look good. In fact, he makes Miley Cyrus look positively Disney, doesn't he? As a mom, I hope he can get his act back together. But, I have my doubts.

Posted by Alexandra MacAaron at 11:36 AM