Pass the Popcorn: Into the Woods 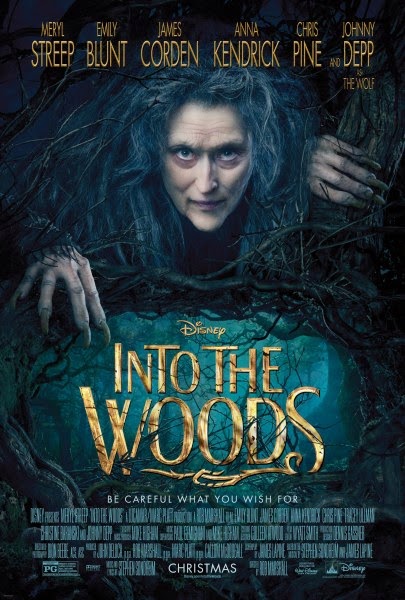 It was 1986; I had moved back-back to Boston (after moving back to New York after college). I had no money. I was living in a one-room apartment on Beacon Hill and pretty much subsisting on ramen noodles and Kraft macaroni and cheese. (I told you I had no money.) Nevertheless, I loved my new job, my new neighborhood, the new friends I was making. I couldn't afford to go the theatre much, but I figured that would all change once my career took off. (Aren't we wonderfully confident at 24?) Meanwhile, I had a VCR and a 99-cent video store around the corner.

My family back in New York went to the theatre often and kept me abreast of the latest shows on Broadway (and took me to them whenever I visited). One day, I received a postcard from my mother. It was the poster art for a new Stephen Sondheim show, Into the Woods. They had passed them out to the musical's patrons hoping they would spread the word. (Remember, we were decades away from social media and viral marketing.) My mother's handwritten message was succinct:

Several years later, I was doing a bit better financially. I was able to build a CD collection of favorite musicals (as well as buy legitimate food). First, I replaced all my scratched up record albums. Then, I became fascinated with Sondheim and bought Company, A Little Night Music, Sweeney Todd, Passion, Assassins, and Sunday in the Park with George. His work lacked the lovely melodies of Rodgers and Hammerstein, but I found his lyrics fascinating. Despite my mother's earlier warning, I invested in a copy of Into the Woods.

I confess, I loved it.

Besides the allure of the whole fractured fairytale thing, there were serious themes that warranted listening and listening again to appreciate. The idea of nice vs. good. Our need for happy ever afters and our bewilderment when we get what we want and then realize that what we got isn't what we want anymore.

Despite multiple tours and revivals, I didn't get a chance to see a live production of Into the Woods until last winter. I took my daughter and two friends to see a small but really excellent version of it by one of Boston's regional theatre companies. We all loved it, and looked forward to the by-then announced movie version. Yesterday, with homework (mostly) done, my daughter and I went to see it at our town's tiny cinema. I brought bottled water and M&Ms and we bought two bags of popcorn.

We both loved it. We agreed that Emily Blunt, Anna Kendrick and James Corden were all fantastic. With Daniel Huttlestone and Lilla Crawford, the (let's face it, difficult) casting of the "dim-witted boy and hungry little girl" was ideal. (Jack and Riding Hood can be so obnoxious.) I have a thing for wolf Johnny Depp, always have. And we agreed that the two princes, Chris Pine and Billy Magnussen, were dreamy and their duet "Agony" was a highlight of the movie.

But, the character I gravitated to most was the Witch.

It's not because Meryl Streep is a goddess brought to Earth and everything she touches turns to gold. (She is and it does, but that's not why.) It's not because I'm feeling old and ugly and more than a little wicked. (I am and I am and I am, but that's not why either.) It is, of course, because of all the characters, the Witch is the one who voiced how I feel as the mother of a teen.

As the movie finished — without many happy endings but with some hope for the future — La Streep sings Sondheim's beautiful "Children Will Listen" over the credits.

By all accounts, including his own, Sondheim had a fairly miserable youth. Openly gay today, he never had any children. But he definitely understands how it feels to lose your little one to the big bad world (or — we can't help but hope —  to a big old happy ending).

I'm working on that one right now.

If you enjoyed this post, I invite you to order a copy of Lovin' the Alien at www.lovinthealien.com.
Posted by Alexandra MacAaron at 12:19 PM