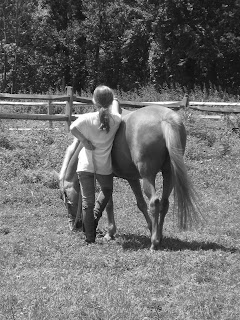 Some people spend their entire life looking for their true love. My daughter found it when she was four. That was the year all the girls in Miss Amy's preschool class discovered Spirit, an animated feature from DreamWorks.
Spirit tells the story of a mustang stallion, captured by soldiers, befriended by a Native American boy, and eventually reunited with his herd. The mustang is kind, honorable, brave and, when he sings, sounds remarkably like Bryan Adams. My daughter and her friends played Spirit at recess, put up Spirit posters, devoured easy-to-read Spirit chapter books, wore Spirit hair accessories, hosted Spirit birthday parties. And, they watched the movie over and over, and over and over, and over and over. To this day, if I happen to catch Spirit on TV while I'm changing the channel, I can recite every line of dialogue.
My daughter eventually stopped watching the movie multiple times a day, but her obsession with all things equine continued to grow. She yearned for riding lessons, but the stables near us wouldn't take her until she was six. On vacation in Mexico, where the rules were a bit more relaxed, she was able to ride with us through the Yucatan jungle, along a beach and out into the water. It was funny to watch her confidently keep her seat while countless adults slipped off their horses into the water. She was already fearless. Much more so, I confess, than her loving mother. (Note to self: never agree to ride the horse they call "Conan." What were you thinking?)
Her next opportunity to ride was down in New York City, where her grandmother booked a lesson at the famed Claremont Stables on the upper westside. She was a few weeks shy of her sixth birthday, but what doting grandmama would let that get in the way? A little white lie makes for a happy little granddaughter. At just under 40 pounds, she rode an enormous palomino mare.
Weekly lessons started in earnest the following September. At first, she was too short to reach the horses' backs so sullen teenage girls had to help us tack up. She walked on a lead line around and around the ring. She took it seriously. She took direction. She got back up when she fell off.
We moved to another stable the next year, a posh hunt club with very strong traditions and very strict rules. As you would expect from the rather lock-jawed environment, they believed in riding outside in all weather. "Builds character, you know." My daughter learned to walk and to trot. She no longer needed the lead line. And, she won her first blue ribbon.
Two years later, we changed stables yet again. She's moved on to cantering and jumping, riding cross-country and competing in regional events, often bringing home ribbons. She has 2-3 lessons per week, works all day at the stable every Saturday, and she'll attend a competitive riding camp in Vermont this summer.
Some other mothers complain to me that their daughters haven't found "a passion" yet. This is most definitely not my problem. All other extracurricular interests — gymnastics, dance, piano, archery, swimming, creative writing — have fallen by the wayside. She eats, sleeps, breathes, lives, dreams horses. All horses, all the time.
In some ways, this obsession makes life easier. Looking to reward her for a high honors report card? Book an extra cross-country lesson. Advising friends or relatives about appropriate birthday presents? Just point them to the Dover Saddlery website. Need to threaten her with a punishment worse than death itself? The simple warning, "You're about to lose a lesson" puts the fear of God into her young equestrienne heart.
I'm no horsewoman. I'm terribly allergic and up until recently more than a little afraid of them. My daughter astounds me. She is naturally comfortable in the saddle but works her tail off to perfect new skills and technique. She outrides girls who are bigger and older. In her class, she is the girl that the coach puts on any horses that are acting up so she can "school them."
Riding is not an inexpensive hobby. On top of the lessons and event entry fees, there are helmets, jodhpurs, boots and show jackets. Assuming she stays with it (and who wouldn't assume so; she's been riding more than half her life), we will eventually have to lease or buy a horse. So much for any thoughts I might have had about early retirement.
But, there are many upsides as well. I've already talked about how hard she works, how determined she is to improve. And, if that isn't enough, there's always my husband's perspective. You can visit a stable any time, any day and you will virtually never never never see a boy.
"Better the stall than the mall." Indeed.
Posted by Alexandra MacAaron at 12:17 PM