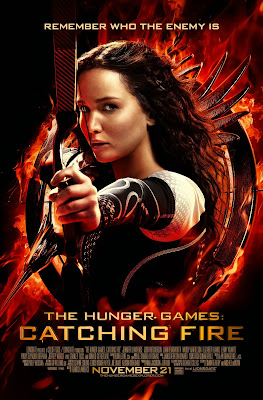 Let me start this post by quoting my teenage daughter.

She did find her voice a moment later, though, and declared it "Frrrrrrrrrrrrkin' brilliant."

My daughter, like teens everywhere from what I'm told, is a rather impatient young person. So, when The Hunger Games: Catching Fire opened last week, she had to see it right away. Right! Away!

However ... my daughter, like teens everywhere, is also not very skilled at planning ahead. So, while it was never a question that she would see Catching Fire on its opening day (if not a sneak preview screening the night before), it became very much a question when our town's tiny cinema was sold out. Sold! Out!

Enter her dear mamma, a.k.a. the enabler. I found seats at a larger multiplex a few towns away. Word spread and I was suddenly putting several tickets on my American Express. The initial plan was that we would drive the eager fans to the theatre, then have a nice dinner somewhere. Another parent was slated to pick them up.

The odds were never in our favor.

Turned out there were too many teens (and not enough seatbelts). Only one adult would be able to go. It also turned out that the game plan had changed. We were now on call for pick-up, not drop-off. My husband marched around in self-righteous indignation, and then settled in for a casual dinner and some DVR catch-up before heading off to retrieve the moviegoers at 10:00 pm. (Father of the Year Award, anyone?)

I was already half asleep when my family returned, but I heard all about the film the next day. In fact, in an act of extremely effective manipulation, my daughter coerced me into buying another round of tickets, this time for the two of us. "I can't wait for you to see it," she cooed. "You're going to lo-o-o-o-ove it." We'd seen the first Hunger Games together, and she didn't hesitate to play the 'it's our tradition, Mom' card. Was I fooled by her sudden interest in my happiness? Of course not. Did I buy the tickets? Of course.

We were supposed to see this wonder of modern moviemaking Sunday night. Imagine my surprise when she came to me Friday with another request. A different set of friends were going that evening. Could she go? Oh, and by the way, could I put the tickets on my charge card? As per usual, I was the best mother in the world ... for about twenty minutes.

To give credit where credit is due, when it finally was my turn to see Hunger Games: Catching Fire, I had to agree that it is an excellent movie. Jennifer Lawrence is the real deal — a fine actress, an apparently down-to-Earth young woman, and the star of a gazillion dollar Hollywood franchise. The movie was exciting and surprisingly well-written. I actually enjoyed it. My daughter, round three, was (again) enthralled.

The thing is, I remember being so completely obsessed with movies. I saw the Who's Tommy several times when it came out (I won't say when), and my theatre friends and I went to the midnight showing of Rocky Horror every single Saturday for over a year. Who am I to throw stones? (Rice, maybe, playing cards, maybe, but not stones.)

When it comes to my daughter getting what she wants from me, the odds are always in her favor.

If you enjoyed this post, order a copy of my new book Lovin' the Alien at www.lovinthealien.com.

Posted by Alexandra MacAaron at 7:27 AM

Email ThisBlogThis!Share to TwitterShare to FacebookShare to Pinterest
Labels: Hunger Games, Hunger Games: Catching Fire, Jennifer Lawrence, May the odds be ever in your favor, Moms, Movie, Teens