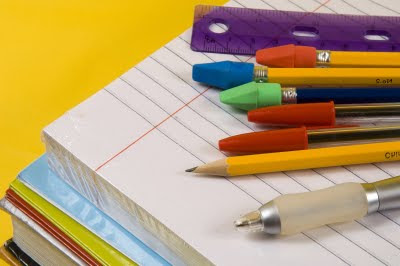 With all due respect to champagne toasts and "Auld Lang Syne," I've never felt that January first was really New Year's. For me, it was always the Tuesday after Labor Day.

Going back to school was the ultimate fresh start. And, although it's been many (okay, many many many) years since I was actually a student myself, I still get excited as September comes around again each year.

True story. When my sister, brother and I were kids, we spent summers in a little town in Missouri with my maternal grandmother. This was quite a change from the "bright lights, big city" of New York. Around mid-August, the local kids with whom we had played for the past several weeks would head off to school. Back east, we wouldn't start again until September. So, I'd sit on my grandmother's front porch and watch the school bus pick up my friends and sigh with sadness and envy.

We've already established that I'm somewhat of a geek.

As a consolation prize, my mother let us shop for school supplies. One year, my mom had to borrow an extra suitcase just to bring them all home. I remember in particular two cloth-covered loose leaf binders: one denim and one red and black plaid.

Man, I loved those notebooks! But, I digress.

My daughter is a more typical tween. She has had a fabulous summer filled with fun and friends and freedom — and she is most certainly not looking forward to its end. I remind her that it will be good to see all her friends at school. She reminds me that she can see them now at the beach. I say, "Won't it be exciting to find out who your teachers are?" She looks at me like I have two heads.

Back-to-school shopping is yet another mother-daughter ritual that is fading away. My daughter, rightly, doesn't want to buy any clothes until we pull out her fall and winter wear and see what still fits and what doesn't. (I think she's also waiting until she sees what everyone else is wearing, which is in itself a smart strategy. I'd rather not spend a small fortune on jeans, boots and running shoes only to find out that they are the wrong jeans, wrong boots and wrong running shoes.) Similarly, she doesn't want to buy school supplies until she knows her schedule. Something about how many binders she'll need and how she can minimize between-class trips to her locker.

Nevertheless, Saturday found us at Staples because we had volunteered to build a backpack for a disadvantaged middle schooler in our area. My daughter and I have done this for the past several years and it's a great hands-on way for us to give back to the community. This particular shopping trip was a bit stressful though. I was deep in the doghouse because my daughter had assumed she was riding and I had assumed she knew she wasn't. Basically, she hadn't said anything to me for the past twenty-four hours except, "I really wanted to ride," "It's not fair," and "You don't understand."

Our first stop was the backpack display. My daughter was texting (probably reporting me to Social Services), but she managed to grab a bag and fling it into our cart. It was cute, kind of a rose color with a grey graffiti print. Fortunately, I looked at the price tag: $79.99! "No way," I told her. I found what was arguably an equally cute one for $19.99. "No way," she told me. We compromised with a mid-priced option.

Spiral notebook, 3-ring binder, pencils, pens, compass. As we checked items off the list, my daughter reluctantly pocketed the iPhone and started paying attention. Clearly I would choose all the wrong things if I was left to my own devices! How could I possibly think any self-respecting middle school student would want pencils with peace signs on them? Or a fuzzy calculator? Or yellow Post-It Notes?

By the time we had filled the cart, my daughter was in charge, and our relationship was back in business. A quick trip to CVS and we had added hair accessories, some character erasers and a Tinkerbell PEZ dispenser (why not?). We both declared that the backpack was now "Awesome."

My daughter may not look forward to September like I used to. But, we both felt better after our shopping trip. And, we both hope that the girl who gets the awesome backpack will have a very wonderful new year's day.
Posted by Alexandra MacAaron at 3:27 AM