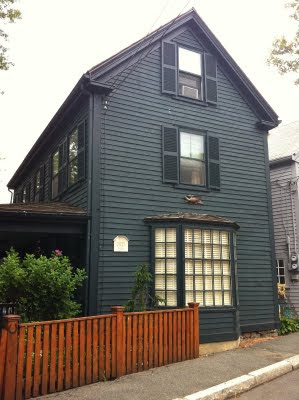 My adorable niece is visiting us with her mother. My niece is four years old, an age when confidence and competence don't always align. She, of course, wants independence and is perfectly happy strutting around our house on her own. The adults, of course, are concerned about our two steep, crooked staircases and — much to her annoyance — follow close behind.

Our house was built in the 1830s and it is rich in character. There are nooks and crannies and "secret passages." Two of the three bathrooms have massive clawfoot tubs. The floors are antique wide pine. And, the aforementioned staircases, one in the front of our house and the other leading from the kitchen addition to my daughter's lofty bedroom, are death traps for toddlers.

In New York City, my niece rarely has to negotiate stairs. She lives with her parents, two cats and a dachshund in a brand new high rise apartment building. They are the apartment's first tenants so when I say new, I mean n-e-w new. A talking elevator (how cool is that!?!) takes them up and down and down and up.

So, the stairs are a novelty here, as are the fireplaces, the skylights on the third floor and the pitifully lean vegetable garden (cherry tomatoes and basil and that's pretty much it). Most people who visit — especially those from a big city or a younger part of the country — are enchanted. "It's so quaint," they say. Or, "It's so charming." Or, once, "It reminds me of the House of Seven Gables."

For my tween daughter, living in an old colonial home presents limitations. For example, there simply isn't a room big enough for a Wii. There isn't a finished basement in which to build a family room or what I like to think of as a tween den of iniquity. (Our cellar is old and wet and anyone over five feet tall has to stoop if they're doing laundry.) Although we did give her the largest bedroom and her own bath and — for the record, hello! — she has plenty of space, this isn't really a "hang-out" house.

Owning an antique home in a very strictly monitored historic district comes with distinct responsibilities. We are prohibited from making any changes that can be seen from the street. We had to go before the historical committee (my husband calls them the "hysterical committee") for permission to put up a fence to protect our then tiny daughter from nearby traffic. One member voted against it because, as she said, "You knew where the house was situated when you bought it," and "Besides, I don't like fences."

The woman did have a point. Not about fences, per se, but about our actively choosing to acquire and live in a really old home. We like it. We like the history and the uniqueness. At Christmastime, when I go overboard with wreaths and garlands and lights and four separate trees, it is transformed into something out of Dickens.

Typically, we're not only satisfied but downright smug about our old house. We snidely refer to new builds as "McMansions." But, I have a confession to make.

Sometimes I envy my friends who live in new houses. I long for floors that are level, doors that open and close without sticking, and that little swoosh sound when a new window closes snugly. I'd like a walk-in closet and a jacuzzi tub. I'd like a laundry room (my daughter rides horses; I do a lot, oh a lot, of laundry) that doesn't require contortionism or a follow-up appointment with a chiropractor.

But, then I think about the legacy we are leaving. Our daughter lives in a house that is nearly 200 years old. We have the house's history — everything from the dates of the two different additions to the time when our town's shoe industry was depressed and four individual families lived here. We are now, and forever more will be, a part of this.

And, someday when another family buys this house, perhaps thinking it's pre-historic, they'll know that we were here.
Posted by Alexandra MacAaron at 4:41 AM