I Know How She Does It 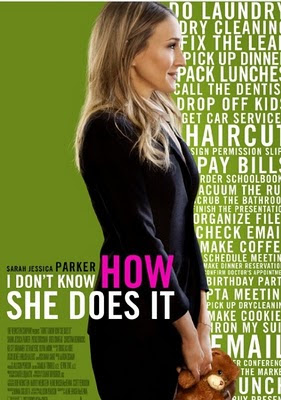 I always assumed my beautiful little daughter would grow up to love the same things I do. Oh well ... That was one of many (many, many) expectations I had to reset. I'm a neat freak; she's a slob. I like dressing up; she prefers dressing down. I love wandering through museums; she'd rather wander through the woods ... on the back of a horse.
So, I was very pleased when she agreed to go to the movies with me this weekend. I love movies, any movies. The more movies, the better. My daughter was humoring me, but I didn't care. We were going to the movies!
We selected I Don't Know How She Does It. I'm a big big fan of the book; I related to working mother Kate from the very first page when she was distressing a store-bought pie in order to pass it off as homemade at the school bake sale. "This is so me!" I thought. And, indeed, in 2002 when the book was published, I really was living a parallel life of the novel's heroine. I was juggling a marriage, a home, a preschool child and a high pressure job. I was flying to Seattle every other week for an important client. I was bribing my daughter (and assuaging my guilt) with unnecessary airport souvenirs. I hadn't quite stooped to pretending other people's pies were my own — but only because I hadn't thought of it.
Bloody brilliant!
Anyway, I wasn't so sure I would like the movie. Film adaptations often fall short of books — especially beloved books. And, the choice of Sarah Jessica Parker worried me. From the preview, it appeared that much of the movie's story would be told in a first person narrative. Could we really sit through ninety minutes of SJP's voiceover without hearing Carrie Bradshaw?
We were willing to try. We bought two popcorns and a diet coke (we also smuggled in some Reece's mini peanut butter cups — shhhhhhhh) and settled into our seats. The movie hasn't received great reviews and the theatre was fairly empty, so we had our choice of seats and plenty of room to spread out. After what seemed like an age of ads and features and trailers, it began.
There she was! Distressing that pie! Once again, I recognized myself. Sarah Jessica Parker did a terrific job making you believe that a woman who is lucky enough to love her job and lucky enough to love her family has pretty much run out of luck. Everyone conspires against you: the impatient boss, the conniving coworker, the judgmental in-laws, the holier-than-thou PTA moms. My only criticism would be that Kate, understandably frazzled, was a bit too disheveled from the get-go. It would have been more fun to watch her crumble over time.
Parker was backed up by a solid supporting cast: Christina Hendricks, Kelsey Grammar, Seth Meyers, Jane Curtin. Greg Kinnear, a personal favorite since his early days on Talk Soup, was endearing as Kate's long-suffering husband. And, Pierce Brosnan was appropriately dashing as her business associate, would-be romance. (My daughter, by the way, editorialized mid-movie that Brosnan gives her the creeps ever since he attempted to sing in Mamma Mia! I told her she wasn't "the target audience.")
We both thoroughly enjoyed our afternoon at the movies. But, the best part was the drive home when I shared my own working mommy stories. Like ...
The time I was pulled out of line at an airport gate to have my bags hand-checked. (This was right after 9/11.) The very serious security woman had quite a shock when she unzipped my bag and three enormous Power Puff Girl pillows popped out. Blossom, Bubbles and Buttercup must have been happy to be released. They were squeezed in so tight, I had to sit on my carry-on to close it.
Back when I was pregnant and had to leave one meeting at a utility company six times to throw up. My female coworker explained, "Oh, don't worry about her. She's just having a baby." The all-male room violently shuddered and gasped out loud. They thought I was having said baby ... like, NOW.
Once when I went to a client's office to make an important presentation and learned afterwards that I had glitter all over my suit jacket because we were going through a fairy princess phase. (Hey, when you think of all the things that could end up on a toddler's mother's jacket, glitter ain't so bad!)
The countless zingers I received from well-meaning relatives and stay-at-home moms. The playdates that I couldn't reciprocate. The store-bought bake sale contributions. Staying home from work because of her conjunctivitis. (Going to work with my own conjunctivitis.) The time I missed a flight in Chicago and sat in O'Hare's Terminal 2 sobbing because I wasn't going to get home in time to tuck a particular little person in.
But, through it all, I wouldn't have changed a thing. All right, maybe I wouldn't have missed that flight. And, maybe I would have kept a lint brush handy. It was tough and often (so often!) I felt like I was shortchanging my job or shortchanging my family, and always always always shortchanging myself.
But, I set a good example for my daughter. When I told her (and tell her) that she can succeed in a man's world, she knows I believe it because she's seen me do it.
It ain't always easy, but I do know how she does it. And so does every working mother.
Posted by Alexandra MacAaron at 4:44 AM

Email ThisBlogThis!Share to TwitterShare to FacebookShare to Pinterest
Labels: I Don't Know How She Does It, Moms, Tweens, Working Mothers