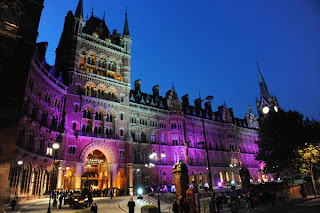 We received the first "Save the Date" email over a year ago. Our good friends who live in London not only invited us to the bat mitzvah of their eldest girl, but my daughter was asked to make a special "friendship speech."


My husband bowed out of the journey; we had an annual sailing trip scheduled for the following week, and it was just too much time away. But, my daughter and I were really excited to go. Although she had been to London before, she was very young and remembers just bits and pieces (like the pool at our Cotswolds hotel and the trampoline in our friends' garden). Our only worry was whether or not she would be out of school yet. With even a handful of snow days to make up, we would have had to fly to the U.K. Friday night, attend services and the party Saturday, and fly back Sunday. Ugh!


Luckily, we had a snow-free winter — a rare and wonderful thing for New England. I told the bat mitzvah girl that it was a good sign. (I didn't mention anything about global warming.)


As I've already stated, we have known about the bat mitzvah and the speech for more than a year. So, my daughter, being a typical teenager, planned exactly what dress she would wear, exactly which shoes, exactly how she would do her hair.


When did she write her speech?


That would be exactly on the plane going over. On my iPad.


In her defense, we had already made a list of all the things she wanted to mention. She had also agreed that a poem would be the best approach. But, as a mom who likes to do things well in advance of deadlines, I was starting to stress.


As per usual, my daughter pulled it off. (I don't know why I'm surprised. Her entire middle school career was built on last minute papers and projects for which she somehow always earned A's.) She wrote the poem quickly, and I proofread it and made some suggestions. I did insist that she rehearse it in our hotel room a few times. Other than that, she had it covered. (Her exact words would be: "It's covered, Mo-o-om." Complete with an eye roll. But, I digress.)


Our young friend read her Torah portion beautifully in services and the party was fantastic. There were elaborate candy-covered topiary centerpieces on the tables. (In a brilliant move, paper bags were passed out as the evening ended so that these works of edible art could be broken down and taken home to enjoy later.) There was a DJ with two back-up dancers, a photo booth (which, I have to say, was enjoyed by many an adult as well as the kids), sparkle tattoos, sunglasses, hats. And, the entire gala took place in the stunning St. Pancras Hotel, a place so grand and glorious and otherworldly that it was used as a set for the Harry Potter movies.


When it was her turn, my daughter got up, took the microphone, and though she confessed later to being a little nervous, she was splendid. All-in-all, the teen's speech — and the celebration itself — was a great success.


Here now, for your reading pleasure is ...

"Ode to a Bat Mitzvah Girl"

On a New York morning in 1975,
(Many years before we were even alive,)
Our mothers met with very little fuss.
Think about it — they were the same age as us!
They were forever friends, just like the song,
Through colleges, weddings and some years in Hong Kong
My mom heard you'd arrived, she just had to meet you;
It would take a whole weekend to properly greet you.
She flew off to London, didn't take me with her.
(Excuse me, what am I, chopped liver?)
But, that didn't stop us from becoming fast friends!
In New York and Massachusetts, our playdates had no end!
In 2003, we visited — oh, what a scene!
The London Eye, pony rides and that keen trampoline.
I was only 6, you just 5 and your sister was 3,
But, no doubt about it — she kept up with you and me!
Pretty soon, you came to visit us in Marblehead.
We had loads of fun, all three of us in one bed.
And that first trip was the time I absolutely swore,
Nothing could hold us — not a lock, not a door.
I would give you a midnight tour of my house;
You and your sis promised to be quieter than a mouse.
But through the duration of that entire six-day trip
I never once hosted such a tour, what a gyp!
My alarm clock malfunctioned without a single qualm,
Was it fate, was it luck or was it ... my mom?
We also went to the club to swim in the pool.
Oh how good the water felt, so nice and so cool!
The beach was such fun, the ocean great too,
With all of its colors, deep greens and sea blue.
We all cruised the harbor, you even drove the boat.
Trust me, you drove better than my dad, that old goat.
The many years have merged into what feels like just a few.
Each year, we have changed and we just grew and grew.
Through thick and through thin, we have stayed special pals,
From the U.K., from the U.S., we are fab-u-lous gals!
We may have our differences, we may have our sames.
(How cool you and my mom share your first names!)
So whether I say tomato or you say to-mah-to,
I say potato and you say po-tah-to,
There's just one last thing to say on your bat mitzvah weekend.
Mazel tov, mazel tov, I'm so glad you're my friend!
Posted by Alexandra MacAaron at 11:18 AM