They Are All Our Children Too 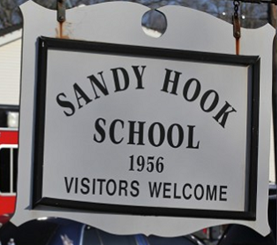 I am at a loss for words.

I am a writer. For nearly thirty years, I've made my living by my pen (or, these days, by my keypad). I've entertained you with tales of my "alien" every two to three days for the past twenty months. But, words are failing me now.

Since Friday, I have been at a loss.

What can anyone say about the tragedy that took place Friday morning in Newtown, Connecticut? How could words possibly do justice to the agony and despair that families there are feeling? And, how do I, a mother with an unharmed daughter who will see another birthday and assumedly many more thereafter, have the right to say anything at all?

I've written about it before, and I firmly believe it. When I became a mother, I became everyone's mother. When someone else's baby is hurt or sick or sad, I easily and immediately project my own child onto the one who is suffering. It's common for people to witness profound grief like that we're seeing in Newtown this week and say, "I can't imagine!" The thing is ... I can imagine. What I can't conceive is how a mother could ever go on afterwards.

As a country, we owe every parent of every person killed at Sandy Hook an apology. Not an "I'm sorry for your loss," but a deep and sincere admittance that we let those innocent babies (and brave adults) down. They say, "we get the government we deserve." We have sat back while our elected leaders were bullied by gun manufacturers, enthusiasts and associations. And who were the ultimate victims of our inaction? The very people that we are here to protect. Our children.

There is a beautiful song from the show Miss Saigon, called "Bui Doi" (or "dust of life"). These lyrics have been playing and replaying in my mind:

Today, President Obama made a speech — and a commitment to the American people — about gun control and ending the senseless violence we have experienced. It was both passionate and rationale. And long overdue.

"But the fact that this problem is complex, can no longer be an excuse for doing nothing. The fact that we can’t prevent every act of violence, doesn’t mean that we can’t steadily reduce the violence and prevent the very worst violence."

I can already hear the self-satisfied response of some: "But, guns don't kill people. People kill people."

And, if you think an incident like Sandy Hook Elementary School couldn't happen in your town, at your school, think again.

The president and, by his appointment as leader of the task force, the vice president have their work cut out for them. Obama has promised a definitive recommendation by January which he has pledged to push through. He has encouraged Congress to address these issues immediately.

If he is unsuccessful, I suggest that every mother in this country descend on the capitol. I know of nothing more powerful than a mother's love for her children. It takes work, but this is still a country in which the people can demand — and obtain — justice.

No, we cannot completely safeguard our families. But, as the president said, "We have a deep obligation to try."

The children of Sandy Hook are all our children too.

Posted by Alexandra MacAaron at 3:01 PM