The Lady Is A Punk 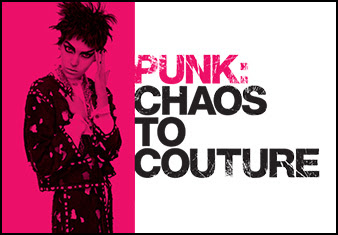 My teenage daughter and I spent the last several days showing our guest from Barcelona around my hometown, New York, New York. The city so nice, they named it twice.

What fun! The weather was gorgeous and we were able to do all the fabulous touristy things that native New Yorkers rarely bother to.

Hello, I had two fifteen year old girls with me. Do you even have to ask?

So on our last morning, having seen the sights (and shopped the shops), I pulled parental rank and insisted that we visit the Metropolitan Museum of Art. Besides being one of my favorite places in NYC (or anywhere, for that matter), I was desperate to see Punk: Chaos to Couture.

The new Costume Institute exhibit displays about 100 outrageous ensembles, clearly inspired by the punk rock scenes in London and New York about four decades ago. The concept basically is that the world of haute couture (then but to some degree now) owes a lot to do-it-yourself — and "f*ck the establishment" — street fashion. Music and video enhanced the experience as we wandered through room after room.

It was outrageous, yes, but also familiar. Bittersweetly so.

I may be a middle-age mom now, but I'm no stranger to mohawks and safety pins. C'mon, I lived in the East Village in the mid-80s. And while my look then was certainly one of the tamer ones in the neighborhood, I went to clubs in jumpsuits and high tops, ripped shirts and rubber jewelry.

At one point in the exhibit, I turned to my sister who had joined us, and bemoaned my current life. Where was my downtown loft? My asymmetrical hair? My edgy punk couture? "I live in a preppy town in a tiny antique house," I wailed, "I buy clothes at Talbots!"

This is the second time I've felt this way in just about as many months. At a young friend's graduation this spring, I met rock legend Jim Steinman. If you don't know the name, you most surely know his work. He wrote Bat Out of Hell (1 and 2) and singlehandedly created the bigger-than-life persona of Meatloaf. I was thrilled to talk with him after his rather unconventional commencement speech. He was wearing a leather jacket with spikes; I was wearing embroidered capris.

One of the many places we visited in New York was Urban Outfitters. While my daughter and her friend looked through the sale area, I was drawn to another part of the store. There, I saw tank tops with embroidered skulls, lace-up combat boots, ripped and pinned shirts, baggy cargo pants. A young salesgirl eyed me curiously.

Posted by Alexandra MacAaron at 12:06 PM