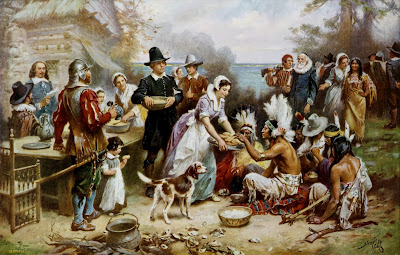 In a day and a half, those of us in these United States will partake in a tradition known as Thanksgiving. It doesn't matter how you feel about the invasion and subsequent genocide that took place when this country was "discovered," "founded" and "settled" (you now know exactly how I feel about it). The concept of stopping and giving thanks is a powerful one.

In practice, this year will be less about being grateful for what we have and more about conspicuously consuming as much as we can — whether that means eating too much or camping out at the local shopping center to grab as many "Black Friday" bargains as possible. Some retailers are starting the madness on the holiday itself, forcing associates to cut short time with their families.

Unfair, exploitive, and certainly not in the spirit of Thanksgiving.

As the mother of a teenage daughter, I try to set a good example: help her feel genuine gratitude for all we have and genuine compassion for those who have less. Like most of our friends, we have much more than we need. In fact, that's one of the earliest lessons my husband and I tried to teach. It went something like this ...

"I need ... (fill in pretty much anything that a young daughter would want: a toll house cookie, a Glitter Princess Barbie, fairy wings, the new Elmo videotape ...)"

"Is it food, shelter, water or oxygen?"

Understanding that your needs have been met (your needs and a lot of your wants too) is a first step toward gratitude. This is not just an admirable feeling. It's absolutely critical to our health and well-being. Last year, the American Psychological Association presented a study demonstrating that teenagers who were grateful were more likely to be hopeful, happy and well-behaved at school.

Giacomo Bono, Ph.D., a researcher from California State University, put it this way: "More gratitude may be precisely what our society needs to raise a generation that is ready to make a difference in the world."


Inspired by one Oprah Winfrey, I started a gratitude journal a few years ago. Each morning, I would list five things I was grateful for. This didn't last long. Not because I was ungrateful, but because the process was so boring and redundant. But, I think it may be time to dust off that journal, and buy one for my daughter while I'm at it.

This Thanksgiving, I'm thankful that I have so many things to be thankful for. As always (well, maybe not always, but at least 90 percent of the time), my daughter is on top of my list.

If you enjoyed this post, order a copy of my new book Lovin' the Alien at www.lovinthealien.com.
Posted by Alexandra MacAaron at 12:12 PM