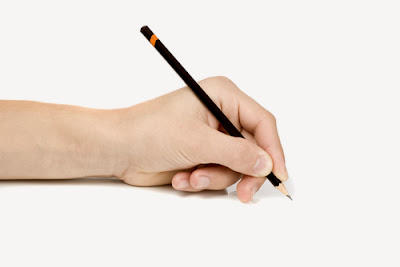 My daughter is a lefty.

My teenage daughter is left-handed.

My husband and I are both righties, and so is everyone else in the extended family, except for one person: my father. My daughter was born just four months after my father passed away, making it (as I've written before) simultaneously the happiest and saddest year of my life. Every time I heard that song by Mike and the Mechanics, "The Living Years," I choked up. (I still do, actually.)

I wasn't there that morning
When my father passed away
I didn't get to tell him
All the things I had to say
I think I caught his spirit
Later that same year
I swear I heard his echo
In my baby's newborn tears
I just wish I could have told him
In the living years.

Well, try as I might, I didn't hear my father when my baby girl cried. That doesn't mean he wasn't in there somewhere (or up above, looking down). But, by the time my daughter was a toddler, we knew he had left his mark (get it?). Like her grandfather before her, she was a lefty.

I remember all the artwork she brought home from preschool as she learned her ABCs and how to spell her name. At my first parent-teacher conference (the first of many, many), I asked if the reason for all the mirror writing was because she was left-handed. The teacher looked at me in confusion. "Does she do mirror writing?" she asked. I led her over to the classroom bulletin board and showed her example after example. "Oh," she laughed. "I don't even notice anymore. They all do it."

Being a lefty didn't affect my daughter very much. She was decidedly challenged in the scissors department, but so were other right-handed students. When she joined a girls softball team, we bought her a special mitt. She wouldn't have thought twice about it if it weren't for one particularly hateful father of the opposing team's pitcher. He encouraged his daughter (full voice from across the field) "She's a lefty! You can strike her out!" My daughter, who was never exactly a Babe Ruth to begin with, was mortified, did indeed swing and miss three times, and said adios to softball forever, soon after.

Team sports aside, there are plenty of inconveniences you have to learn to live with if you're left-handed. Pretty much anything we use in school or everyday life was designed for a person whose right hand is dominant. Like ...

Yes, everything's a little tougher for lefties. But the news isn't all bad.


Left-handed people are purported to be more creative than right-. As an unofficial case study, I can attest to this. I once managed an ad agency creative department and half our art directors were lefties!

Left-handed people are more likely to be geniuses (20% of MENSA members are lefties even though only 10% of the total population are).

One-of-a-kind in our family, my daughter is nevertheless in very good company. Barack Obama, Paul McCartney, Michelangelo, Carol Burnett, even Kermit the Frog. (Not to mention my friend Liane. Oh ... I just did.)

For Christmas, I'm going to look for a good pair of left-handed scissors for a certain teenager's stocking. It's the least I can do.

It's not a symmetrical world, but my lefty daughter is all right by me.

If you enjoyed this post, order a copy of my new book Lovin' the Alien at www.lovinthealien.com.
Posted by Alexandra MacAaron at 11:27 AM