Sugar and Spice and Science and Math 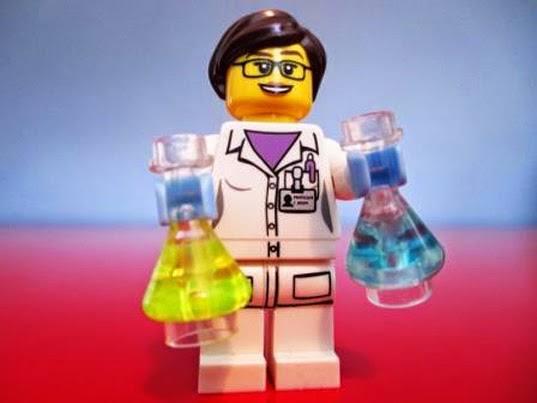 When my now teenage daughter was in first, second and third grades, she was one of her class's top mathematicians. Each of those years, in fact, she competed for that honor against one particular classmate. A boy.

The stakes were fairly low. There were tests and projects and something called "mad minutes." Each day, the kids were handed sheets of problems. Single-digit addition first, followed by subtraction and eventually multiplication and division with more complex numbers. Once you could complete a sheet within the allotted sixty seconds, you could bump up to a more difficult set.

My daughter was a whiz!

In the years since, her science and math skills have remained fairly high, but her interests have taken her in other directions. Still, I never really thought about the fact that she was following a fairly familiar pattern. Although younger girls hold their own in these subjects, by the time they get to middle school, high school and college, they fall behind.

But this doesn't have to be the case.

Earlier this year, the Organization for Economic Cooperation and Development administered a test to 15-year-olds in 65 countries. The results are both encouraging and disheartening. According to The New York Times, which covered the story earlier this year, "girls generally outperform boys in science — but not in the United States." Or, it turns out, in England or Canada either. Meanwhile, in some countries that we might assume would be less progressive than ours, the girls really excelled. In Jordan, for example, girls outperformed boys by 8 percent!

So, clearly the aptitude is there. It has to be environmental factors: teaching, perceived opportunities and rewards, or — more likely — perceived disadvantages and consequences. Girls may not want to be stereotyped as "geeks" in a world that's so busy "Keeping Up With the Kardashians."

A marketing associate of mine, Mélanie Attia, just posted a great piece about how to encourage more girls to explore STEM (Science, Technology, Engineering, Math) careers. With her permission, I'm sharing it here.

Lifting the veil off science, technology, engineering and math

In early June 2014, I was invited on behalf of Silanis, to participate in ScribbleLive’s chat on the shortage of women in the essential “STEM” fields. With me during the hour was an inspiring group of women that included Cecily Carver, Co-Director of Dames Making Games, Tendu Yogurtcu, VP Engineering at Syncsort, Jen Lamere, a 17-year-old who won the TVnext Hackathon, and Laura Plant, Director at Ladies Learning Code. Topics during the hour included how to get more women to enter into the tech field, the obstacles they face, what it’s like to work in the field and what can be done to lower barriers to entry.

I was very fortunate during my formative years. My father would have nothing to do with gender stereotypes. I was raised in an environment that allowed me to embrace science, biology and technology at a very young age. Although I was given the typical girl toys, I also got a microscope with bugs to dissect and examine and a telescope to look up at the cosmos. At the mere age of 6, I learned how to code on my own Commodore VIC-20.

Asking the perennial question: how is it made?

There are ongoing debates about how young children should be before they start playing video games and how much time should they spend doing it. Maybe the answer should be:first learn how the games are developed, and then play them.

Who should ask the question?

Realistically, not all parents are technically literate nor interested in coding in general. This is where elementary school and community initiatives like Kids Code Jeunesse come into play. This is the place where minds are opened to the possibilities outside of what is known.

The same way that history, geography, math, physics and biology can inspire and lift the veil off who we are and where we come from, coding is just another essential building block to all children's education. It's like learning a new language, a new way to solve problems.

The ecosystem that supports STEM matters too

In all honesty, I am not a programmer - at least, I don't consider myself as such. My love of the web and knack for just trying to figure out how to build a website is what propelled me into my current career. Once I built my first website, I had to figure out how to get people to it. Over time, I built my expertise in digital marketing.

My understanding of the guts of a web application gives me the ability to understand the challenges businesses face when having to adopt new emerging technologies to remain competitive. Being able to grasp how e-signatures work, what makes them compliant, risk-free and efficient within a workflow allows me to relate to the audience.

I am incredibly fortunate to work in a company that has so many women executives in director and VP positions. There is a whole ecosystem that supports IT. It spreads far and wide from sales to human resources, operations, customer relations and finance. No matter the department, it is beneficial to feel comfortable within the environment.

Don’t get me wrong, we also have a growing number of women developers on staff. I really believe the tides are changing. We need to keep the momentum going.

Want to help get more children interested in STEM?

Get involved in your local community efforts. Speak up when you're invited to meet your local school board. Finally, the next time your child is absorbed in their smart phone or gaming console, don't forget to ask the question: "How do you think this works?"

Thanks, Mélanie! Let's see if we can catch up, ladies.

Posted by Alexandra MacAaron at 8:18 AM