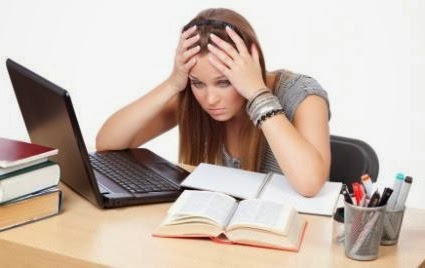 Last night, my teenage daughter had a bit of a meltdown. She had returned from the stable (practicing her driving there and back) and was getting ready to embark on what can only be described as an unreasonable load of homework plus prep for a last-minute math test. Her iPhone was acting funky, and — for several agonizing minutes — it appeared that all of the photos she had downloaded in the past year (concerts and friends and Photography 2 assignments) were missing from her laptop. OMG! I was able to find the pictures, but the damage to my offspring's nervous system had been done.

Quite simply, my daughter was stressing out. And, for the record, when she's stressed, we're all stressed.

So, this morning, when I saw the headlines reporting the findings of a recent "Stress in America Survey" by the American Psychological Association, my immediate reaction was ... "Duh!"

New Study: Many Teens Report Being Under Stress

Teens Feel The Stress — And Many Don't Manage It Well

We all tend to romanticize the carefree (high technology-free) days of the past. I know this. But, I am absolutely positive that my high school days were less stressful than my child's. I was a high-achieving kid in a school full of high-achieving kids (when I say the girls in my graduating class were "rocket scientists," I'm not using the phrase as slang; I'm being quite literal). I had after school activities. I applied early-decision to a very selective university and got in.

Bottom line? I was no slacker.

But, I just didn't have to manage the same level of pressure.

These days, in communities like ours, students start taking AP courses sophomore year. The top performers are in a constant battle with each other for the kind of through-the-roof transcripts they need to get into Harvard, Yale or Princeton. Remember when a 4.0 was enough? Welcome to the world of weighted GPAs!

WTF? There'd be something wrong with our kids of they weren't stressed out.

Last night was a bit of a wake-up call for me. And it was underscored by the APA's survey. 27% of teens describe themselves as "extremely stressed." 34% expect that stress to increase. 40% report feeling irritable or angry; 36% feel nervous or anxious. Most react to the stress by eating, going online or "snapping at their friends." Very few turn to positive outlets like exercise or meditation. (Not surprising; very few adults do either.)

Teen girls are more stressed out than teen boys. And, finally, stress is associated with depression, anxiety, sleep disorders and eventually chronic illness.

So, here's what I'm going to try to do. Lay off a little. Just as my daughter is under pressure to perform, moms like me are under pressure to push their children further, faster, higher. We see the problems, but we worry about easing off and thereby keeping our kids from reaching their full potential. We are also caught up in the race to the top. Our high school has become so focused on "student outcomes" (state and standardized test scores, admissions to elite schools) that the curriculum and individual education is suffering. The place is like a pressure cooker.

In fact, my daughter's mental and emotional and psychological health would probably be better if she were homeschooled.

Except the stress would probably kill me.

If you enjoyed this post, I invite you to order a copy of my new book Lovin' the Alien at www.lovinthealien.com.
Posted by Alexandra MacAaron at 9:56 AM