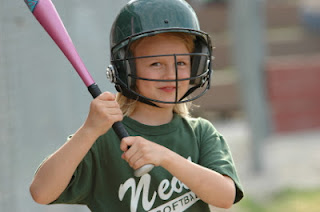 This morning, I woke up before anyone else and took a nice long walk. It was a brisk but sunny day and it felt great to be outside. A few blocks from our house, I watched a rather tired looking dad (clutching a travel mug of coffee) as he loaded a team of tiny softball players into his station wagon.


Like so many other scenes of family life, this took me back. But, I don't remember my daughter's short stint in softball fondly. And, it's not because of the early morning games or the fees for the uniforms or the times I had to volunteer in the snack shed or the season that never seemed to end.


It's because of some childish behavior ... from some grownups.


My daughter was not quite ten when she started playing in the "minor leagues." After tryouts and a fairly complicated team selection process, she was assigned to the Dodgers. They were a fairly ragtag bunch. There were a couple of girls who were a little taller and more athletic than the rest, but most of the team had barely started to get the hang of it when the season started.


In all honesty, the girls were far more interested in the color-coordinated hair ribbons and socks that one of the mothers had found. And, they spent an inordinate amount of time singing and chanting:

Or the even more obnoxious:

(Clearly, they couldn't make up their minds. They were, however, quite adept at giving me a headache. But, I digress.)


The best team in the minors that year was the dreaded Yankees. We faced off against them early and were soundly defeated (I think the score was something like 25-0). For some reason, these girls looked much older than ours. They were better players and certainly had practiced more. It was clear from the very start of the game that we were outmatched.


Their coach took it extremely seriously though and his behavior set the tone for the parents. So not only were the Dodgers whipped, they also had to deal with a bunch of adults carrying on as though they were at a professional game. Cheering for their daughters and booing ours (yes, really).


The season continued and the Dodgers improved, slowly but surely (well, mostly slowly). The coaches learned each of the girls' strengths and weaknesses. My daughter, for example, could hit a little and catch a little, but she could run very very fast. So, the strategy was to get her onto first base and then let her speed around on a better batter's hit for a run.


The girls had fun anyway. For some reason, we didn't play the Yankees again in the regular schedule. It was very rainy that year and the league eventually gave up on trying to squeeze in missed games. The season would have to stop when school ended so we suddenly found ourselves in the playoffs. By then, the Dodgers had improved a great deal and had even started winning .


As unbelievable as it seemed, we made it all the way through to the final "World Series" championship game. We were matched, of course, with ...


The girls were petrified.


"They haven't seen you play in a long time," we told them.


"We're so proud of you for getting this far," we told them.


But, they weren't buying it; they fully expected to get their butts kicked. But, they all showed up, with their ribbons and their socks and their inane chants. We didn't dare hope they would win, but we all crossed our fingers that they would get at least a few runs.


If the Yankees, and more specifically, the Yankees' parents, were loud and smug and mean-spirited in that earlier game, they were ten times more so. We surprised them though. The Dodgers were up first and actually scored. The Yankees realized that they would have to play a little harder than they had expected.


As my daughter got up to bat, the pitcher's dad yelled out, "She's a lefty! Strike her out!"


My daughter froze and missed a couple of perfectly good hits. But, she somehow made it to first base. Later in the car, she was inconsolable. "Why did he have to tell everyone I'm a lefty?" she sobbed. It was the first time my daughter ever felt different or inferior because she isn't right-handed. And, she never really went out for a team sport again. (To this day, I would like to slap that father across his face. But, again, I digress.)


The Dodgers lost to the Yankees but by a far smaller margin than their earlier defeat. They were good sports, congratulating the winners and gamely getting their pictures taken with their "Runners Up" medals. The Yankees, on the other hand, practically screamed the lyrics to Queen's "We Are the Champions." And, as you may have guessed, their self-satisfied parents screamed right along with them.


Buddhism would tell us to look at situations like that final game as an opportunity to practice forgiveness and compassion. But, let's face it; I am not the Dalai Lama.