Pass the Popcorn: The Hunger Games 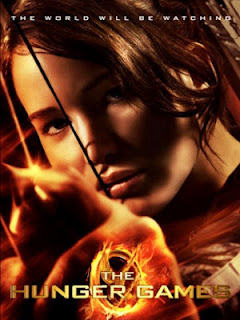 Like any self-respecting eighth grader, my daughter saw The Hunger Games on the weekend it opened. Not once, but twice. First, she saw it with two friends from school. The next day, she saw it with a different friend and that girl's family. She came home beaming.

"I can't wait for you to see it, Mom! You're gonna love it." However, in reality, she could wait for me to see it. In fact, I was forbidden to see it until I had finished the books.

Was I already in the middle of a different book? Yes. Was my workload insane? Yes. Did I have other things to do? Yes, yes, yes. But, I was heartened by the fact that my daughter recognized the value of reading prior to viewing. So, I borrowed my husband's Kindle and read all three books in the course of a few days. Trust me, that is not as grand an accomplishment as one might think. They are extremely quick reads and every chapter ends with a cliffhanger. With my task complete, we decided to hit the multiplex after my daughter finished at the stable Sunday afternoon.

I was looking forward to our movie date. I loved the fact that we were going to see an action adventure movie starring a female protagonist. With all the blood and guts and gore I had just read, this promised to be no typical "chick flick." And, the chick in point, one Katniss Everdeen in case you've been living under a rock, is played by a remarkable young actress who had wowed me a couple of years ago in Winter's Bone, Jennifer Lawrence.

Most of all, I was looking forward to spending time with my favorite person.

We ran a couple of errands and had a quick lunch at Panera, just ordering soups so that we would have plenty of room for a giant popcorn in the theatre. Once inside, we found great seats and plenty of room to spread out; surprisingly, there weren't a ton of people. When I commented on this, my daughter rolled her eyes: "Duh, it's already been out for a month!" A month, mind you, is a very long time when one is fourteen.

There were too many ads, too many previews (this from a woman who loves previews) and too many service messages about turning off our cell phones. But, finally, it was time for ...

The Hunger Games! ("May the odds be ever in your favor.")

You know, the movie really was good. If I had been in there in my capacity as a cultural journalist writing a thoughtful piece of film criticism, I might complain about the herky-jerky handheld camera work. Or, the confusion of some key fight scenes. Or, the near absence of any subtlety or nuance whatsoever.

But, I was there to have fun with my daughter. The action was non-stop. The sets and costumes and special effects, top-notch. The villains from the Capitol were as superficial and selfish as I had pictured them. Katniss was as brave and good. Her rival boyfriends, Peeta and Gale, were true and just handsome enough to turn the target audience's heads. (There's an ongoing online debate amongst the teen girl set right now. "Are you Team Peeta or Team Gale?" And, in a rather clever if slightly naughty compound word, if you are rooting for Peeta's romance with Katniss then you are "Pro Peeniss." Ugh.)

For me, Woody Harrelson practically stole the show as a boozy misanthropic former champion and current mentor to the star-crossed Tributes from District Twelve. It was all just fun!

Until it wasn't. Twenty minutes before the end of the movie, the screen went black; the soundtrack stopped a moment later. A few patrons left their seats to go and get the theatre management. The rest of us sat in what would have been the dark except that everyone had whipped out their cell phones about a nanosecond after the projector malfunction. It was eery seeing individual faces illuminated by cell phone screens.

"WTF," I thought. "You can't wait five minutes to see if the movie comes back on?" And, in case you were wondering, this was a group of adults not teenagers. (After all, every teenager in the area had already seen the movie about a month ago.)

A woman from the theatre came in and explained that they were fixing the projector. She apologized and handed out free passes (two per person!) for a future movie. After about a ten-minute delay, the movie started again. My daughter and I were psyched! Four free tickets and we still got to see the end of the movie.

Katniss and Peeta were trapped on top of the Cornucopia with the vicious "Career" Tribute from District Two, Cato, and a bloodthirsty "muttation" dog pack below them when ... the unthinkable happened. The movie stopped. Again. OMG!!!

This time, they couldn't get the projector fixed. So they passed out another free pass for each of us and we went out into the bright lights of the lobby. There was another showing down the hall, and we could have sneaked in. But, it had just started and despite my (genuine) disappointment in missing the last five minutes, I really couldn't sit through the whole thing again. There was homework and laundry and dinner waiting for us, so we reluctantly left.

Technology to the rescue! As soon as we got home, my daughter booted up her laptop, Googled "Hunger Games Last Ten Minutes," and found a bootlegged clip on YouTube. For the record, I am not one to condone online copyright infringement. But, I was willing to make an exception. The last few minutes of the movie were exciting despite the tiny screen, and the less than professional video quality. Katniss and Peeta returned to District Twelve and the sinister President Snow plotted his next move.

Net net: we now have six free movie passes, we had a wonderful afternoon together and (thank you, nameless YouTube pirate) we got to see the happy (well, happy until movie two is released) ending.

The odds were most definitely ever in our favor.

Posted by Alexandra MacAaron at 7:07 AM