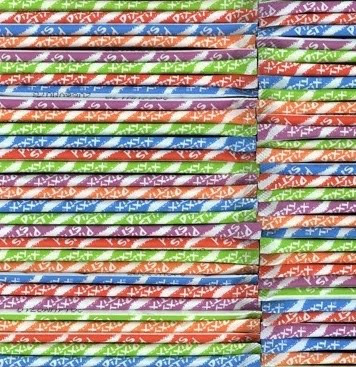 As long as I can remember, I have always had a sweet tooth. Really, I'm one of those people who should never buy chocolate in bulk — because that's how I'll eat it, in bulk. (And that's how I'll look, bulky.)

But, I was always fairly discerning about the sweet treats in which I indulged. No cakes or cookies for me, thank you. I go straight to the hard stuff: dark chocolate or sea-salt caramels or (better yet) dark chocolate-covered sea salt caramels. Why waste the time — or calories — on anything less?

My daughter is not so picky. In fact, she seems to take great pleasure in the very candy that wouldn't even tempt me. Case in point: Pixie Stix.

Pixie Stix, for those of you who aren't aware, are long skinny paper tubes filled with colored sugar. Since they are pretty much 100% sugar, they are very sweet. But, I doubt that sweetness is the allure. They are tactile treats; they are interactive. You have to pinch off the edge of the tube and pour the sugar crystals into your mouth.

Of course, all that pure sugar (well, pure except for the artificial coloring they add to make the fun even funner) packs a punch. There's a viral cartoon on the Internet that shows a before and after user and reads, "Fun Fact: Pixie Sticks Were Actually Invented to Spot Future Cocaine Addicts." And, if you ever tune into "Toddlers and Tiaras," you'll see ambitious stage mothers feeding their little darlings sugary juice boxes and what they jokingly refer to as "Pageant Crack." Sometimes 14 or 15 sticks at a time.

So now, in my never ending quest to make my daughter happy (even at the risk of her perfect teeth), I have become a Pixie Stix enabler. Either that, or I just enjoy a bargain.

Recently, I found 24-packs of Pixie Stix in the dollar aisle at Target. Knowing my daughter and her crew, and their penchant for experiential candy, I bought a package and sent it to school in her lunchbox. I thought it would be a nice surprise. I thought she would enjoy sharing the nice surprise with her friends. I thought that the nice surprise would make me a "cool mom." At least temporarily.

I didn't realize the Pixie Stix would satisfy her entrepreneurial spirit as well as her sweet tooth.

This happened before. I found some tiny flocked bears at a craft store and bought a handful for my daughter. They were a quarter a piece. She immediately set up a little store out of her backpack and sold out the first day. She then presented me with a list of pre-orders for more bears: 8 brown, 5 pink, 2 blue, 6 white ... you get the picture. The problem was that she was charging a quarter a bear. I was paying a quarter a bear. Plus tax. Plus gas. Bottom line? I was the one bailing out the backpack bear business. (The Federal government never stepped in. Not once.)

Apparently we learned our lesson. Not only did my daughter appreciate the lunchbox gesture, she came home a richer young woman. She charged her friends 25¢ per Pixie Stick. Even after I reclaimed my dollar investment, she had still cleared a few bucks. Now this math I liked!

The middle school principal did not like it as much. In his daily rounds through the cafeteria, he spotted my daughter and her friends with their drug of choice. He made them put the candy away and go talk to the Health Ed teacher about why they should make smarter choices.

Let's face it though. The meteoric rise and fall of my daughter's Pixie Stix business isn't that surprising really. Even without the heavy hand of the law. After all, the merchandise in the Target dollar aisle changes faster than a tween can text. We would have been caught without a supplier sooner rather than later. And, the market is fickle. What's cool today will almost certainly not be cool by tomorrow. In fact, sadly, the fourteen year old girls are about to head into high school and a world that's fraught with crash diets and eating disorders. There probably isn't a place for Pixie Stix there.

But for now, I wonder ... how much do you think we can mark-up Ring Pops?
Posted by Alexandra MacAaron at 10:57 AM