Between a Rock and a Science Project 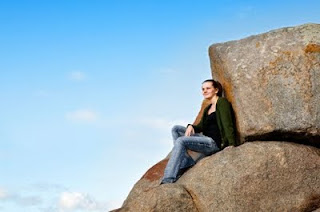 Earlier this week, I was driving my daughter home from one of her riding lessons. It was about 6:30 in the evening. "We need to stop at the bird sanctuary," she told me. "I have to take pictures of rock formations."
The bird sanctuary in our town is out on a peninsula that has a light tower, some yacht clubs, and beautiful big houses (they were once Summer "cottages" — you know, cozy weekend digs with twelve bedrooms and private docks). It's really lovely and it's only a ten-minute drive from the downtown neighborhood in which we live. No problem, right?
Well, I had been stuck at the stable for nearly two-and-a-half hours. Loving Frank, the wonderful novel based on the story of Frank Lloyd Wright's mistress, was sitting in a tote bag on my bed along with a brochure I needed to proofread, my journal and the latest issue of The New Yorker. We had run out of the house in such a rush that I'd left them behind. Allergies prevented me from hanging out inside the stable. And, I had tried watching my daughter's dressage lesson, but I had forgotten bug spray as well as reading material and the mosquitos chased me back into the car. Suffice it to say, I had just had a fairly long afternoon and would rather have headed straight home.
However, I make it a point to support my daughter in all her academic efforts. So, off we went to the bird sanctuary.
It was a chilly evening and a little bit damp. I was wearing thick rubber sandals that are supposed to help my plantar fasciitis — one of my many stunning red carpet middle-aged mom looks. (Let's just say that if there had been any paparazzi at the bird sanctuary, I'd be on everyone's "best dressed" list!) I describe my fashion footwear, just to give you the full effect. My arches were supported but my toes were exposed and if I thought there were hungry bugs at the stable, I hadn't experienced anything yet. The bird sanctuary is a virtual swamp (all the better for the water fowl that live there) and the mosquitos were thrilled to meet my feet.
We marched on in.
Without sounding like too much of a nag, I tried to engage my daughter in a dialogue about the assignment. 'Turns out, it was a project called "Photo Evidence," and the seventh grade science class had to get outside and take pictures of different types of rock weathering. These pictures, along with descriptive paragraphs, were to be presented on posters. I wondered aloud when the science teacher had assigned this massive project (after all, I had known about it for all of thirty minutes). My daughter conveniently ignored the question and focused instead on the task at hand.
"Do you think this looks like a glacier erratic?" she asked.
Say what?
She rolled her eyes. "A glacier erratic," she repeated and continued to recite, "A rock that is much bigger than its surrounding rocks. A rock that was dragged along with a glacier until the glacier dropped it off."
"Oh," I nodded, "That kind of glacier erratic. I thought you meant the other kind. Yes, absolutely."
We spent another 45 minutes or so wandering through the jungles of the bird sanctuary. My daughter acquired photo evidence of wind and water erosion, mechanical and chemical abrasion, oxidation and lichen. I acquired mosquito bites. It was getting dark, and I eventually insisted that we leave the preserve via a side gate and return to the car by walking along the perimeter where there were houses and streetlights and sidewalks.
On the way back, I thought about homework. The role I play in my daughter's homework and the role my daughter's homework plays in my life.
It's a balancing act. You want your tween to do her own work, but you also want her to get the best possible grade. I try to enable my daughter, ensure that she has everything she needs to get the work done — supplies, snacks, Internet access, good lighting, a nice big (albeit perpetually cluttered) desk. I do proofread (I can't help it), but I try to circle back to her with directional feedback. "You need to check the spelling in the second paragraph," I suggest, still insisting that she locates and fixes the actual mistake.
I certainly know moms who cross the line, authoring more than they edit. On the flipside, my daughter has friends who don't seem to get any assistance at all.
It makes me wonder how the middle school expects kids to succeed if they don't have a computer. Or an English major mother who works out of a home office. Or a father willing to make an emergency trip to Staples for more index cards or poster board.
Or the ability to drive five miles to a bird sanctuary on a school night.
A recent article in The New York Times talked about a New Jersey school district that is re-evaluating its homework policies, in order to better balance study and play time. Similar proposals are being considered in California and Toronto. Kids do seem to have too much on their plates these days. Not only does homework take longer than it did when I was in junior high, but my daughter and her classmates are overcommitted with sports and other after-school activities. Nevertheless, until the system changes, we'll continue to plug away at the middle school curriculum together.
The "Photo Evidence" assignment was completed, like so many others — at the last minute and as a family affair.
Posted by Alexandra MacAaron at 3:58 AM