A Room of One's Own? Audible Moan. 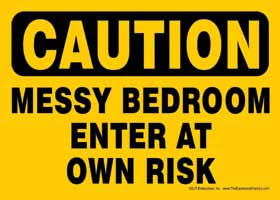 I am now — and have always been — a neat freak. We're talking a bona fide Felix Unger, Martha Stewart, masking tape down the middle of the room ("don't you dare cross this line") neat freak. Really, just ask my poor sister who was forced to share a room with me for sixteen years. Or my college roommate who only had to deal with it for two.
My husband is also fairly neat. He not only keeps his belongings where they, well ... belong, but he often does laundry and dishes. He enjoys watching his widescreen TV with a beer at the end of the day, but, he's never expressed a burning need for a "man cave."
My husband and I have gotten along quite well in the housekeeping department.
My tween daughter and I? Um ... not so much.
Let me back up. My daughter has a wonderful, spacious bedroom, with a vaulted ceiling, exposed beams, windows on three sides. It's bigger, significantly bigger, than my first apartment in Greenwich Village. The room even has its own bathroom, with fluffy clouds painted on sky blue walls, and astroturf in place of carpeting.
When I was thirteen, I would have gladly given a limb for my daughter's VIP suite.
I had such fun decorating it for her when she was little! Of course, it was important to me that it stay neat and tidy, so I found ingenious storage units: bright canvas drawers that fit into a wooden cabinet. They were perfect for diapers and baby toys originally, Polly Pockets and horse models later. And, my strategy seemed to work. In fact, visiting grandmothers were always amazed by how quickly and easily my daughter cleaned up after herself when she was finished playing. It filled my heart with maternal pride to see her line up her Barbies and Kens and all her "sweeties" in a perfect row. Now, that I'm thinking about it, she had about twenty Barbies and only three Kens. Clearly, we were living the polygamous "Big Love" version of America's favorite dolls.
At any rate ... things were good for many years. Good and nice and clean and orderly with everything in its place. And then, one day, my daughter decided that being neat was my thing. Not hers.
"I'm my own person, Mo-om!" she informed me in that exasperated vaguely whiney voice I know so well. "It's my room, not yours."
And, from that moment on, my daughter made a commitment to clutter. She's a determined young lady and takes great pains to succeed at whatever she puts her mind to. The deconstruction of her once tidy room is no exception. Her dresser drawers bulge with wadded up logo tees. The floor of her closet is piled two feet high with discarded jeans and sweats. Bookcases groan under the weight of too many volumes, and teen toiletries are strewn on every surface. Her desk is completely hidden under one giant mountain of homework, magazines, CDs, postcards, books, art supplies, and horse show applications.
As for her bathroom? Please, don't get me started! With all of her discarded riding clothes and gear, looking cluttered is the least of its problems. Let's just say that if you like the way a horse stall smells, you'll like my daughter's bathroom.
Each morning, after I pry her out of bed, we have the same argument about making that bed. When she was little, I made it for her. Then I taught her how to make it and that lasted a week or so. Then, I decided that we would make it together. That also lasted about a week. Now, more often than not, I just make it myself. Am I letting her get away with something? Obviously. But, would it drive me crazy to walk by her room with her unmade bed? Absolutely.
And, there is the problem. I care more than she does.
Once, I asked a renowned family psychologist (the mother of my daughter's classmate; I didn't actually seek her out for this issue) for help. "Does my daughter not see the piles on the floor when she walks right by them?" The woman thought for a moment and answered. "I don't know if she doesn't see them. But, I do know she doesn't care about them."
Here's what I think. My daughter is becoming her own person. She is actively separating herself from me every day. My inner vision is that of a neatnik. Hers, consequently, at least at this time, cannot be. If living in a messy room helps her feel independent, I have to go with the flow. After all, there's no real damage being done. Her grades are great; she claims to know where everything is. Nothing's missing; nothing's broken. We have had no science experiments thriving in dirty dishes. There's been no vermin. Yet.
A good friend (a good friend with an older teenage daughter) suggested that I simply hang a "Toxic Waste" sign on my daughter's door — and close it. I do know that this is good advice. But, for now, I'll nag a little, tidy up a little, roll my eyes a little. At the end of the day, it's her room.
And — oy vey — the way it looks right now, she's welcome to it.
Posted by Alexandra MacAaron at 12:17 PM