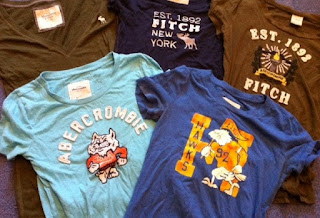 I can't keep up. It is humanly impossible to keep up.
The other morning, my tween daughter came downstairs dressed for school. She was wearing her new Converse sneakers and skintight stonewashed jeggings. For those of you who do not follow high fashion as dictated by Seventeen magazine, jeggings are the entomological love child of jeans and leggings. My daughter looks good in them; she's thirteen and athletic. (If I wore them, I would look like I was wearing sausage casings.)
But, I digress.
On top, she was wearing a green v-neck tee shirt, over a tank top. I made what I thought was a harmless observation. "You seem to be wearing plain tee shirts a lot these days. Do you like them better than the logo tees now?" She gave me that look — the one that seems to imply 'Have you been living under a rock?' — and said, cuttingly ...
"I hate logo tees."
All right then. Well, I wish she had thought of that before she begged me to buy her dozens of them. Let's see, she has American Eagle Outfitter logo tees. She has Hollister logo tees. She has Aeropostale logo tees. And, she has Abercrombie & Fitch logo tees. Lots and lots (and lots and lots) of Abercrombie & Fitch. Some say "Abercrombie & Fitch." Some just say "Abercrombie." Some just say "Fitch." Some say "A&F." Some have a moose on them. I'm not sure why.
It seems that the coolest must-haves become the un-coolest no-longer-likes at lightning speed. Just when you think you've got it figured out, the wind shifts and you're left with another trip to the mall and a massive bag for Goodwill.
I often wonder where the tipping point is. Is there one all-knowing tween girl guru out there who wakes up and decides, 'Okay, today is the day that madras shorts are no longer cool?' How do they get the word out? And, why don't they tell the parents — before we take out a second mortgage to pay our credit card bills?
Here are some other items that deserve a place in my tween's "here today, gone tomorrow" fashion hall of shame:
Pajamas — If my daughter is any indication, no self-respecting tween girl wears pajamas or nightgowns anymore. It's sweats and tee shirts or shorts and tee shirts. She does wear pajama bottoms as streetwear, but not to sleep in.
Anything Pink — There was a time, long ago by her standard but not so long ago by mine, when my daughter would only wear pink. All pink, all the time. Pink dresses, to be more specific. Back then, I marveled (with a little bit of horror) at what a girly-girl she was. It was very easy to shop for her, though. Today, she avoids pink at all costs. Blue, green, orange, brown, red ... you name it. Just not pink.
Boy-cut Bathing Suits — Last year, my daughter had a very specific two-piece bathing suit in mind. She wanted a sports bra top and boy-cut bottoms. Kind of like the skimpy uniforms women's volleyball teams wear. It took me months to find what she wanted. It took less time, much less, for the suit to fall out of favor.
Various Gym Shorts — In my daughter's middle school, they switch off between Health Ed and Phys. Ed every two weeks. When we went shopping at the end of last summer, my daughter asked for Soffe shorts. These are cotton knit and come in bright colors. The girls wear them with the waistbands rolled down around their hips. We bought several pairs. After her first week of class, she came home and explained that what she really needed was Nike track shorts. These also come in a variety of colors, but cost significantly more money. We bought several pairs. Most recently, she's informed me that what she really (really) needs are girls' basketball shorts. Longer, mesh nylon, also in lots of colors. We bought — you guessed it — several pairs.
If, at this point, you're wondering why I gave in and bought three different rounds of shorts, you don't have a tween daughter.
When it comes to satisfying her changing taste in clothing, my daughter has perfected the response that will get her what she wants. When I say, "Why can't you wear the Soffe shorts?" or "We'll get you new tee shirts when you outgrow the 83 you already have," she gives me a knowing look. It says that I've confirmed, yet again, what she already knows.
That I just don't get it.
Tweenhood is a time of slavish imitation. The need to dress and shop and look like everybody else is strong. Far stronger than logic or the power of motherly advice. I know I could push back harder. When she says, "But Mo-om, everyone else has a North Face fleece jacket," I could say — like generations of mothers before me — "If everyone else jumped off a bridge, would you?"
But the truth is, at this point in her life, my daughter would probably jump too.
And, she'd do so wearing the same shirt and shorts as everyone else.
Posted by Alexandra MacAaron at 8:18 AM