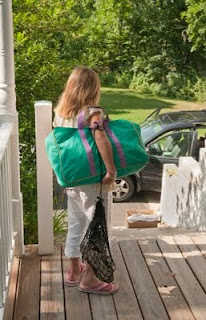 Last week, we packed our bags and left New England's never ending winter for the perpetual summer of central Florida. My daughter's middle school had Spring Break, and we were eager to take advantage of it. (My in-laws have a 2-bedroom bungalow right on Sarasota Bay, and, to be honest, we were eager to take advantage of it as well.)
Our flight was at 6 a.m., which meant we had to leave for the airport no later than 4:15. This particular mom was not looking forward to it one bit. After all, getting my daughter out of bed on a typical weekday — at the relatively civilized hour of 6:30 — is anything but easy. Her alarm goes off and she's allowed one "snooze" cycle. Then, I come in with my best Carol Brady impression.
"Good morning, honey!" This is usually met with ... silence.
"Okay, sweetie time to get up now." More silence.
"C'mon now, I mean it. You have to get up." At this point, she'll actually acknowledge I'm there with an elongated groan and something along the lines of "I hate mornings!" or "Why do I have to go to school?" or "I'm so-o-o-o-o tired." Eventually, I have to pull the covers off and turn the overhead light on full blast. She begs for a few extra minutes after which she promises to get up. However, I know from past experience that leaving while she is still on the bed is a major mistake. So I stay and I nag and I stay and I nag and she eventually puts her feet on the floor. Once she is vertical, I can go downstairs and make breakfast and lunch for her. Ain't life grand?
It's a great source of pride for her that she refuses to smile from the time I drag her out of bed until she leaves the house. (It's a great source of pride for me that she has never been tardy.)
Interestingly enough, on day one of Spring Break, there were far less complaints at 3:45 than I normally encounter nearly three hours later. Hmmm ... can it be possible that the prospect of seven days in Florida was preferable to the prospect of seven hours at school?
We made it to the airport in plenty of time and had an uneventful flight to Washington D.C., where we changed planes for Sarasota. The second flight was a bit delayed, so we bought some Cinnabons and Dunkin' Donuts, and picked up the new issue of Seventeen magazine. (This, my friends, warrants an entire blog post all its own.)
No matter, a mere 30 minutes late, we were boarding. My husband suddenly remembered to mention that our seats weren't together. And, I — just as suddenly — went into automatic pilot overprotective mom mode.
I jumped in a bit too quickly and confidently. "Don't worry, I'll just ask someone to switch with me. It's no big deal." Then I looked at my daughter and saw ... sheer panic.
She was most definitely worried. And, she most definitely thought that it was a big deal. But, sitting apart was not the problem. Obviously, I was the problem. And what was worrying her was not the idea of sitting alone or next to a stranger. It was the idea that I was going to embarrass her, publicly humiliate her, treat her like ... gasp ... a child.
There was fear in her eyes, but she tried to keep her cool. "It's okay, Mom," she muttered quietly but sternly. "Really, it's okay."
I followed her down the jetway and mentally walked through different scenarios. Determined to give her the autonomy she was asking for, I was equally determined to shift gears and rearrange seats if I had the least doubt about whomever she was next to. She went to her assigned seat, tucked her bag neatly under the seat in front of her, and pulled out her book and iPod. She didn't look up as I walked past to my own row.
The flight was fairly quick and I was able to work my way through two back issues of the New Yorker. I confess that I scanned the plane for the back of her head a couple of times. And, I think I heard her order a Coke from the flight attendant. When we landed, passengers filed out row by row and I lost sight of her as a crowd filled the aisle collecting carry-on luggage and eager to leave the plane.
But as I stepped out of the jetway and into Sarasota Airport, she was waiting, smiling, just as though she had never left me.
Posted by Alexandra MacAaron at 1:59 PM