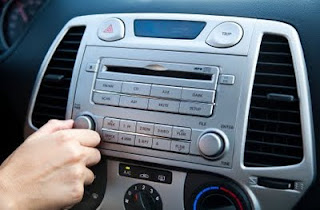 In 1983, Pat Benetar warned that "Love is a Battlefield." In our family, battles often happen on roadtrips because each of our cars only has — gasp — one radio.
I like soft rock; give me a little Elton John or Fleetwood Mac and you have one very happy mamma. My husband prefers classic or album rock, a little harder, longer hair, more guitar riffs. Then, there's our daughter.
Our daughter is a tween living in the greater Boston area. She recognizes no station other than KISS 108!
No indoor voices, please. There seems to be some unwritten rule that you have to practically yell KISS 108! whenever you say it.
At any given time, KISS 108! has only about a dozen songs in rotation. This means that if it's Tuesday afternoon and you are driving to and from the stable for a riding lesson, you're likely to hear the same three songs, four times apiece. Do you know what an "earworm" is? Well, if you don't, try listening to KISS 108!
Sometimes, they break things up a little. They'll play a timeless deep cut classic like Katy Perry's Teenage Dream, which is almost a year old. Can you believe it? I actually have no issues with Ms. Perry, although I'm a bit confused by her choice of spouse. Perry is bright and creative, and she writes her own lyrics which always wins big points in my book. Her song Firework is an anthem urging misfit young people to have faith in themselves. Her earlier songs I Kissed a Girl and You're So Gay may be politically incorrect, but you have to admit they're funny.
So, when KISS 108! plays a Katy Perry song, I'm down with it. When they play something by Ke$ha? Uh ... not so much.
Ke$ha, described by Glee's airhead Britney as someone who has "been a cultural icon for weeks," seems to be building her career on the tried-and-true values of sex and booze. Seriously, based on her hit songs Tik Tok, Take it Off and We R Who We R, we can only assume she is both a slut and an alcoholic. Also, sometimes she wears blue lipstick, which makes her look like the cadaver of someone who was both a slut and an alcoholic. My daughter doesn't agree with Ke$ha's values (or lack thereof), but she likes the music.
This particular mom will be very happy when Ke$ha's 15 minutes of fame are over. The millions she's already made will pay for an awful lot of "bottles of Jack," with which she allegedly brushes her teeth. Ouch.
And, no posting about contemporary radio would be complete without a mention of that queen of bizarre Lady Gaga. Again, the woman is a singer and songwriter, and from what I understand a talented and serious musician. (My six degrees of gaga separation story is that my sister-in-law's mother remembers teaching piano to a little girl named Stefani Germanotta — how cool is that?) Many of her songs preach a kind of girl power, although her attitude about her own sexuality is a bit suspect. I haven't had to explain to my daughter what "I'm just bluffin' with my muffin" means and I'm not looking forward to the conversation. Most of the men in her videos end up dead, poisoned or incinerated by a lethal blast from her brassiere. And, speaking of the House of Gaga, the Lady G. dresses even more outrageously than her pop music grandmother Madonna. After all, Madonna always tried to look good even when she was wearing party hats in unexpected places. Gaga, on the other hand, doesn't seem to mind looking hideous, like a demon or an animal or an alien. She actually wore a dress made out of meat to the MTV Video Music Awards. Was it a comment about the objectification of young women in entertainment? A protest against industrial farming for PETA? I don't get it.
And there's the rub (no pun intended). I don't get it. When my daughter begs for KISS 108!, my husband and I react differently. He resists and then when he finally gives in, he makes fun of the singers and the songs. I let her listen, happy that she's still willing to sit in the car with me without retreating into her iPod earbuds. Like my husband, I really don't like most of the music that comes on. But, I've realized that if I say anything, anything at all, it will simply confirm what she already believes: that I just don't get it.
So, to quote the Go-Go's, rather than Gaga, when we listen to KISS 108!, and we will, "my lips are sealed."
Posted by Alexandra MacAaron at 3:22 PM