Teenaged ... and Knocked Up? 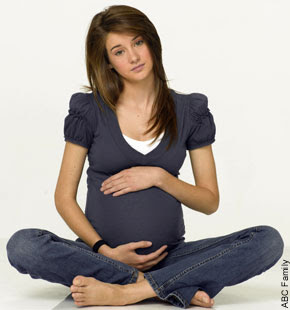 I know I have a lot of family and friends who read "Lovin' the Alien," so let me quickly reassure you ...
No, no, no. No, no, no. I'm not going to be a grandmother anytime soon.
Happily, my daughter is still much more interested in horses than boys. In fact, she has avoided all but one of the middle school "TGIF" dances this year. (The one she did attend, because I insisted she try it, was "so-o-o-o boring.") She has boy friends but not boyfriends, and in this department at least, is in no hurry to grow up.
Phew.
That said, I worry about all the teen pregnancies she's exposed to. There's ABC Family's The Secret Life of the American Teenager, in which poor Molly Ringwald (that's right, John Hughes' little darling from Pretty in Pink) does become a grandmama before her time. This is not a fitting fate for an 80s teen queen, is it? To add insult to injury, the new mom in the show is played by a lovely young actress, Shailene Woodley, who is a very familiar face in our house. Back when my daughter was still enamored with American Girl dolls, Shailene played the brave young patriot Felicity in a TV movie produced by Julia Roberts. We watched this movie on DVD ... oh, about 200 times.
Then, there's MTV's 16 and Pregnant. In each episode, we meet a different teenage mom-to-be. We follow her story as she deals with morning sickness, math tests, adoption decisions, getting kicked off the pep squad. These girls aren't airbrushed models; their stories aren't happy or easy to watch. No doubt, the MTV executives would be the first to defend the show by pointing out just how difficult these girls' lives are. And yet, they're on TV. They have their 30 minutes of fame along with their stretch marks. In our media-obsessed culture, I'm afraid that even a brush with stardom means more than an untelevised functional young adulthood.
And, MTV has followed up the success of 16 and Pregnant with another original show, Teen Moms, in which girl-mothers learn to breastfeed while they earn their GEDs. Again, even as the audience watches the eponymous young mothers struggle, I imagine that there's some degree of envy. "Sure, she and her baby are on welfare, but wow, she has her own TV show. Gyp!"
In a way, the shows are the best of both worlds for today's lowest common denominator viewers: reality show voyeurism that stems from underage sex.
For the record, I'm not a prude, and I don't believe that I'm shielding my daughter from information she needs. In fact, we've faithfully followed Glee — from cheerleader Quinn's discovery that she was pregnant through to the birth and subsequent adoption of her daughter. We recently watched Juno, which, in my opinion, presents a very balanced story about what happens to a smart girl who makes a dumb mistake but takes responsibility for it. In both cases, our watching together created valuable opportunities for dialogue, or as they say, "teachable moments."
Last month, the PTO at my daughter's school hosted a parents' meeting to discuss the health ed sexuality curriculum. They explained that, in addition to teaching about the physical and emotional changes that attend puberty, they talk about decision-making and strategies to delay behavior when a student doesn't feel ready. Hallelujah! This makes so much sense to me. I don't believe that preaching abstinence is an effective approach (after all, teen pregnancy is not a new issue). With hormones raging, "Just say No" is a bit naive. Instead, let's give young people a sense of control over their bodies and a way to say "Not now. Not yet."
Our daughters are so lucky to have the choice to wait. Recently, I volunteered to help a friend with a website for a school in East Africa. Because of this school, girls have an opportunity to get an education rather than become wives and mothers at 13. I was talking to my daughter about it. "Can you imagine?" I asked her. "Do you think you're old enough to be a mother?"
"Mom," she told me, "I'm not even old enough to have sex yet."
From her mouth to God's ears.
Posted by Alexandra MacAaron at 2:28 PM