The Illusion of Control 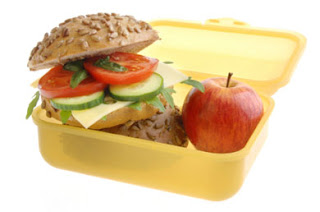 When my daughter was little, she was a very picky eater. The lunches I packed for preschool consisted of chicken nuggets or chicken nuggets or chicken nuggets or, sometimes, nuggets ... of chicken.
Today, with far more options to choose from, I pride myself on my ability to pack a nice balanced lunchbox. A turkey wrap or ham and cheese sub, fruits and veggies, healthy snacks like roasted pepitos or snap peas, popcorn, crackers or baked chips, and bottled water. Mostly nutritious items but things that my tween daughter likes. And, I don't shy away from adding a dessert. I firmly believe that a couple of cookies or a small piece of chocolate go a long way toward keeping a young person happy as well as healthy.
So imagine my surprise when I picked my daughter up at the stable the other day and found that she had eaten her goldfish crackers and her chocolate-chip cookies but nothing else. "Can we stop at Captain Dusty's Ice Cream on the way home?" she asked. Uh, not.
This is an example of what a friend of mine (a friend with four tween and teen children, God help her) recently called, the Illusion of Control. I may talk a good game. I may pack a mean lunch. But, when push comes to shove, I am not in control here. No way, José.
Because, when it comes to control — or the illusion or (let's face it) the utter lack thereof — an uneaten lunch is only the tip of the proverbial iceberg.
I get a call after school ... "Can I go over to so-and-so's house with you-know-who and whatshisname?" Being a responsible mother, I somberly ask "Will there be an adult there?" "Oh, yes," she assures me. Permission is granted.
Why do I even bother? Am I going to drive over there and check? Even if there is an adult, do I know them? Have I checked to see if he or she has a carbon monoxide detector? Or a criminal record?
I may ask my daughter not to loiter in front of Dunkin' Donuts with the other seventh graders who hang out there (bad seeds, all, trust me). She may promise not to. But, can I ever really be sure? After all, she has to walk right past on her way home. Unless I sneak around in a borrowed car, wig and dark glasses, I'm never going to catch her in the act.
The sad truth is that whether my daughter is honest with me or not, the after school situation, just like the lunchbox situation, is no longer in my control. Neither is what my daughter wears.
If one is a tween, one only wears what is cool. If wearing a jacket is not cool, then the tween will not wear it. (I just knew that high school logic class with Dr. Bumby would come in handy someday.) My daughter may leave with a jacket. She may even leave with the jacket on. But, I'm fairly certain that she will be jacket-free by the time she arrives at the middle school. The same is true for a hat, scarf, mittens, umbrella or boots. It may not be in my control, but it's consistent.
Mine is not the only authority that is undermined. There's a dress code at the school. Tank top straps must be two fingers thick (it occurs to me that two finger measuring will come in handy some day when the middle school girls all become bartenders). Shorts must be long enough that if a girl stands with her arms at her sides, her middle finger reaches fabric not bare skin. This rule, however, doesn't take into account shorts that can be rolled up. In fact, some of the most popular shorts have little straps built right in to assist in the rolling up. So, a girl might pass an impromptu inspection in the cafeteria, but she can always step outside and roll 'em up just as high as she pleases.
So you see, I'm not in control, but neither apparently is the middle school vice principal.
Tween leisure time is yet another area that is no longer in my control. I can buy beautiful editions of Little Women, Jane Eyre, or Pride and Prejudice. They look really nice on my daughter's bookshelf. And, that's a good thing because the bookshelf is pretty much where they're going to stay. The books that will actually be read include such modern classics as the Twilight and Gossip Girl series. She doesn't just read these books; she devours them. Whether I like it or not. At least, I remind myself, she's reading.
When she's not reading, she's making or watching YouTube videos, playing games on her iPhone or schmoozing with her hundreds of friends on Facebook. I've set parental controls and "safe search;" I know her passwords; I do check up on her. But, at the end of the day, her digital life (like her analog life) is largely out of my control.
What to do then when my reality is only an illusion of control? How do I ensure that my un-controllable, although perfectly bright and lovely, tween becomes a productive upright citizen?
Freud proposed that the core of personality is formed by the age of six. (Of course, Freud also believed that all women suffered from penis envy, so what did he know?) A more recent study in New Zealand found evidence that personalities are formed by the age of three.
Guess who was in control when my daughter was three? Me! We can only hope that during my brief totalitarian reign, I gave my daughter a lifetime's worth of ethics, morality, self-discipline and control along with the chicken nuggets.
Lots and lots of chicken nuggets.
Posted by Alexandra MacAaron at 6:03 AM