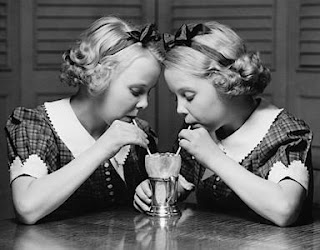 I only have one child. But in essence, I have two different daughters.
First, I have the sweet daughter who went shopping with me while we were on vacation. My birthday happened to fall during our week in Florida, and my daughter and I went to St. Armand's Circle — an elegant shopping district across the bay from Sarasota — to celebrate. She had secured some funds from her father (who did not mind missing the expedition in the least) and was prepared to spoil her mother thoroughly. In fact, I had to be very careful because anything and everything that I happened to admire in passing was pounced upon. "How about this? Do you want this for your birthday?" We finally landed on a lovely pinky ring with a black pearl, white pearl and tiny diamond chips. We celebrated our success with a couple of Caramel Frappucinos at the local Starbucks (another part of the outing that would not have tempted my husband).
This daughter made several appearances during our vacation. I stood beside her while we watched dolphins playing at dusk. We raced together to get back to the air-conditioned rental car before our ice cream cones melted in the afternoon heat. We rode bikes side-by-side through a mangrove swamp. We counted gecko lizards and collected shells. We made microwave popcorn and convinced my mother-in-law to watch an episode of Glee. (The grandmother in question enjoyed all "the singing and dancing." Happily, she didn't pick up on the more off-color bits of dialogue.) We looked at the new issue of Seventeen and agreed that the "most embarrassing" stories in the 'Traumarama' column were pretty silly, but that the Converse All-Stars were pretty cool and she probably needed a couple of pairs for the summer.
It's very easy to like this daughter and, indeed, I like her very much.
Then, I have my daughter's dreadful doppelgänger. She probably didn't want to feel left out so she made several appearances on our vacation as well. Often, technology was involved. If our perfectly lovely daughter was texting a friend, for example, and we innocently asked her to put her cell phone away because we were driving along a particularly gorgeous stretch of beach at sunset and didn't want her to miss it ... POOF! Daughter number one would magically disappear and in her place would be the other.
Daughter number two has the same green eyes, the same shoulder-length blonde hair. She wears the same clothes and answers to the same name. But, we are not so easily fooled. The exasperated sound effects, the over exaggerated eye-rolling, the car door slamming, the bedroom door slamming, the bathroom door slamming ... these precious attributes belong to her and her alone.
Impervious to mortal hours, the other can show up at any time. She can as easily appear at the breakfast table when we insist that she can have chocolate chip muffins or a pop-tart, not both, as she can show her face at bedtime when we declare lights out after she's had two full hours of the latest volume of Gossip Girl.
She is smart, this second daughter. She doesn't hesitate to use her rapier wit or to boldly point out injustices to us, her oppressors. She can be ungrateful. She can be surly. She can whine, whinge and mutter vaguely veiled swear words under her breath with the best of them.
This daughter can be very difficult to like.
So here's what I do ...
When the other takes over, I tell myself that it isn't her fault. My darling daughter is still there beneath the curling lip and furled brow. She's just temporarily possessed by a blonde, green-eyed tween demon. With the proper rituals — and depending on the situation (and my fortitude), these could include consequences or capitulation — the demon eventually goes back to wherever she lives when she's not inhabiting my daughter's size 0 Abercrombie jeans.
Being the mother of a tween is a bit like bargain hunting. You get two for the price of one.
Posted by Alexandra MacAaron at 10:47 AM