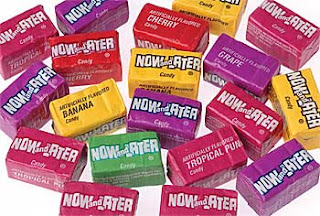 A couple of years ago, I read an interesting article about little kids and their ability to postpone gratification. It was in the New Yorker, which means that it was well-researched and extremely well-written. The point of the story was that one of the most accurate predictors of future success is a child's ability to wait for what he or she wants.
In the study referenced in the article, children were given a treat — a marshmallow, I think. They were told that they could go ahead and eat it, or if they waited they would get two marshmallows. Then they were left alone ... alone with the marshmallow. You can probably guess how most of the stories ended.
I guess one marshmallow in the hand is worth two in the bush.
After reading this, I couldn't help but wonder how my daughter would fare in such a test. She's bright and determined, and she would certainly see the benefit of waiting. But then again, she has an insatiable sweet tooth. (Um, that would be one of the traits I wish she hadn't picked up from moi.) And, like all of her friends, she is the product of an age that seems to place a lot more emphasis on instant gratification than self-discipline.
Self-discipline is tough. It's tough for people my age let alone for tweens. I'm sure this was true thirty years ago, but it seems especially true today. And, its no wonder. With smart phones and PCs, kids have instant access to information, media, entertainment, shopping and each other. Working on a research paper? No need to bike over to the library; the biggest library in the world is right on their desktop. Want a new outfit? They can find exactly what they're looking for and buy it (with their mother's credit card, mind you) in less time than it would take to find a parking spot at the local mall. Feel like going to a movie? No need. Between DVDs, DVRs, and "Instant Queue" Netflix, today's young audience members can pretty much see what they want, when they want, and as many times as they want.
When did we all become so impatient?
Growing up in the 60s and 70s (ouch, that hurts), I had considerably less control over my entertainment. Each Christmas special was only on one night in December. If you happened to have Nutcracker tickets when Rudolf was showing, you were out of luck that year. Similarly,The Wizard of Oz was shown on TV annually and it was a very big deal; the entire family sat down to see it together. On a more regular basis, if you were devoted to a favorite show (The Partridge Family in fourth grade and Happy Days in seventh come to mind), you scheduled other activity around it. When my father brought home our first VCR, we were thrilled. It was a Betamax and weighed about 40 pounds.
Being patient wasn't limited to entertainment either. Long distance calls were expensive, so you only talked to your out of town family on major holidays. When we went away each summer, we waited — albeit a bit over eagerly — for my dad's weekly call from New York City. We lined up in my grandmother's dining room and took turns filling him in on the week's adventures. This process didn't change much when I went away to college; I phoned my parents about once a week and we kept the calls brief. The rest of the time, we wrote letters (gasp!). Or at least they did. I sort of stopped when I found my first serious boyfriend right before sophomore year. But, that's another story.
These days, local, toll and long distance calls are all pretty much the same. I have friends and relatives with kids away at college who talk, text and Skype multiple times a day. On the one hand, it probably makes the empty nest feel a little less empty. On the other hand, it isn't giving anyone a chance to learn about independence, or to synthesize or edit information before they share it. "How can I miss you when you won't go away?"
It's easy for me to shake my head and say "Tsk, tsk." The truth is, when my daughter leaves for college in just a few short years, I'm quite certain that I will be glued to my phone, eagerly waiting every call or text she sends my way.
Still, it makes me wonder. What will become of us when all these impatient little people are big people? By the time my daughter is a young adult, will the world have changed so much that instant gratification is valued above the rewards of diligent study or thoughtful strategy? Will the future belong to those who can not only see it coming ... but can access it digitally in under .05 seconds?
We'll just have to wait and see.
Posted by Alexandra MacAaron at 11:54 AM