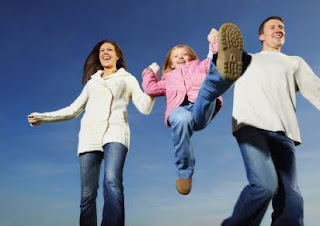 One day, when my daughter was about four years old, it suddenly occurred to her that she didn't have a brother or a sister. I think this must have coincided with a growing awareness of her preschool playmates and how their families were similar and different from ours. She asked us to have another baby so she wouldn't be an only child. But, she had misheard the expression and said, "I don't want to be a lonely child." It was a sweet and funny mistake — her juvenile logic was irrefutable and a little bit heartbreaking.
When I was pregnant, my husband and I agreed that we only wanted one child. It's not because I had all-day morning sickness for 21 weeks (although I did). There were other more strategic reasons. First of all, by the time we had our daughter, we weren't exactly "spring chickens" (my hospital record at the Salem Birthplace listed my condition categorically as "advanced maternal age" — nice). We were doing well financially, but the idea of multiple concurrent college tuitions was downright daunting. Plus, we really liked our life; we especially enjoyed traveling, entertaining, eating out, going to the theatre. And we assumed, correctly I think, that limiting our family to only one child would enable us to continue to do these things. There would just be three of us where there had once been two.
We aren't alone in seeing the advantages of having an only child. Here's some census data for you. There are an estimated 20 million only-child households in the United States; that number has more than doubled in the past twenty years. In fact, both in the U.S. and in most Western European countries, only-child families are the fastest growing family households.There are several factors, such as timing (working couples are waiting longer to start families), and economics. It costs on average between $200-$300,000 to raise a child and that's before you add in any college. Both of these factors come into play big-time in New York City, my hometown, where over 30% of children are "onlies."
The typical family has certainly changed since the 19th century when G. Stanley Hall, the so-called "founder of child psychology," said that "Being an only child is a disease in itself." A disease. Ouch.
We made our decision, and fortunately, because of where and when we live, it was ours to make. But, over the years, I've often wished for another child.
Princess Diana was expected to produce an "heir and a spare," and the Duchess of Cambridge will probably follow suit in the near future. I confess, even as a commoner, I see some sense in that approach. My daughter is not in line for any throne that I know of, but there would be comfort in having a more diversified family portfolio. In terms of my maternal affection, all my eggs are in one basket.
I've heard new mothers wonder how they could possibly love another baby as much as their first one. Yet most of these mothers go on to have a second and sometimes third. Clearly, the heart is infinitely expandable. Having loved my own baby, to this day, I find that I love all babies. Forevermore, I am part of a great sorority of mothers.
Lately, I've found myself wishing for a second child when I find I'm out of favor with my first and only. This happens often (oh, so so often). I feel sorry for myself and think, 'Maybe if I had gone ahead and had more babies, at least one of them would appreciate me.' But with my luck, they would meet in secret, share their grievances, band together and stage a coup.
Mother-tween conflicts aside, there are indisputable good things about being an only-child family. I'm able to give my daughter more of my time, more attention, more homework help. As expected, we do indeed still travel and go to the theatre and eat out. There's better cash flow for things like designer jeans, riding lessons, state-of-the-art cell phones and over-priced, under-nutritious junk food. And, quite honestly, I believe that my daughter has benefited from all the adult company over the years. I'm proud of her high grades, her attention span, and her ability to hold her own when she's the only short person at the table.
But what about that little four-year old's concern? What about the loneliness?
It's a matter of semantics. I encourage my daughter to think of "family" in broader terms. It's not just the three humans (and one tiny, neurotic dog) that live in our house. She has two BFFs she's known since she was two; she literally can't remember a time when they weren't in her life. She has six older cousins on my husband's side who are all smart and beautiful and athletic, who set a good example for her in so many ways. She has one younger cousin on my side, the sweetest little girl who is also an "only." They call each other "sister-cousins." And, she's about to celebrate her thirteenth birthday (we're calling it her "shiksa-mitzvah") with my best friend's teenaged daughter, who is as beloved as any blood cousin or sister could possibly be.
So, G. Stanley Hall, we're going to have to disagree. Being an only child is certainly not a disease. According to Mother Teresa, it's a disease "to be nobody to anybody.”
My daughter is somebody special to an awful lot of siblings.
Posted by Alexandra MacAaron at 2:41 AM