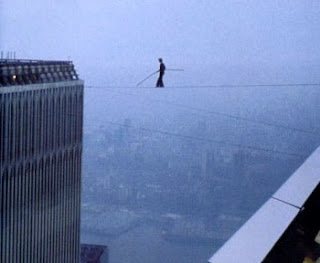 As a blogger, a modern-day memoirist, it's tempting to write about one's spouse. After all, I've been married (most days, happily so) for more than nineteen years. That makes for plenty of material. When I'm tempted to complain or make fun of my husband, however, I remind myself that he is in an utterly unenviable position. He is on a familial tightrope; his home is a minefield. And, as long as I'm mixing metaphors here, he is stuck smack between a rock and the proverbial hard place.
My husband has a daughter going through puberty and a wife going through menopause ... at the same time!
Be afraid. Be very afraid.
Ever since we brought our daughter home from the hospital, my husband's been in the minority. (The dog is a male, granted, but weighing in at 10 and 1/2 pounds, he's a little low on the macho quotient.) Until fairly recently, being the only guy wasn't too terrible. It meant sitting through dance recitals instead of going to hockey games, watching Disney princess movies instead of action adventures. He never seemed to mind though. There's actually a very special bond between a devoted daddy and his darling little girl.
Then ... the hormones kicked in.
Suddenly, everything's a drama. The highs got higher; the lows got lower. Much higher and much lower. Simple decisions like what to wear to school took on life or death proportions. Tried and true friendships became terrifically complicated. Drama, drama, drama. We were a happy family and then one day, bam! Puberty hit us. Puberty hit us hard.
As if that wasn't enough, at the same time, I was going through my own roller coaster of hormonal change. Here are just a handful of the swings my husband has had to deal with:
Temperature Swings
I'm hot. I'm cold. I'm hot. I'm cold. My internal thermostat went on the fritz about five years ago. On a good day, I average about a half dozen hot flashes. Unlike some of my friends, I don't sweat or turn red, fortunately. But, it's still disconcerting to be in a meeting or at the dinner table and feel like my insides are on fire. I've tried soy supplements. No luck. Cutting out caffein. No luck. Dressing in layers. No luck. I've tried thinking of the flashes as little private beach vacations. No f*cking luck, dammit!
Standing with my face in the open freezer door seems to help for a few minutes. As does falling asleep with my face ten inches from the air conditioner. Then, I get cold and have to go get an extra blanket. This process only repeats itself six or seven times a night. My husband, who loves his nine hours of beauty sleep, really appreciates the routine.
Mood Swings
If you think wearing the wrong outfit can drive my daughter to tears, you should see what a Hallmark ad can do to me. Especially the ones with grandparents who miss their grandchildren and then get all teary because the grandchildren sent them some schmaltzy "I miss you" card. Or the ad where the kid comes home from college and his little sister is all excited to see him so they make coffee together. Or pretty much any ad with babies. Or puppies. Or a school bus.
When I'm not singing the blues, I have a whole repertoire of other emotions to experience. Impatience and frustration are right up there. And, stress isn't too far behind.
Weight Swings
These days, when I'm not whining, I'm wining. When asked, I describe myself as a "social drinker." This just happens to be a very social time of my life. Oh, and I also self-medicate with chocolate. Actually, it's not that I eat and drink more than I did when I was young. It's just that my metabolism seems to have changed — and not for the better, I'm afraid. Putting weight on is much faster. Taking weight off is much slower. But, not to worry. A friend recently told me that once you're over forty you're allowed to wear those bathing suits with skirts. I'm not quite there ... yet.
At least, I tell myself, I'm not at my absolute heaviest. Really, I weighed more than this once. It was late in my third trimester, but still ...
Back to my husband. He is often bewildered by the internal battles raging inside his tween daughter. After all, unlike me, he hasn't been there, done that. And, I'm sure he doesn't appreciate my turning the heat off in the middle of winter, or snapping at him, or bitching and moaning about how tight my jeans are. He is remarkably even-keeled in the face of all this fluctuating estrogen. He hasn't moved out. He hasn't taken a mistress. He hasn't even bought a sports car.
So the next time I'm tempted to express dissatisfaction or annoyance with my other half, I'll try to remember to give him the credit he's due.
Then, I'll go pour myself a nice tall glass of wine.
Posted by Alexandra MacAaron at 5:38 AM