No "Glee" for Glenn 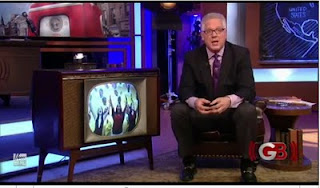 A good friend once described me as the most liberal person she knows. Well, I don't know about that. But, I do know that I don't usually agree with Glenn Beck.

Actually, let me rephrase that. I never agree with Glenn Beck.

This past Thursday, Beck decided to critique a cultural phenomenon that is near and dear to both my heart and my tween daughter's: the TV show Glee.

He began his rant by decrying the lack of values in our culture and consequently, in our children. "Children aren't tethered to anything," he explained, "So we need to be über vigilant." The example that he gave was Glee. The entire clip from Beck's show is only five minutes long, yet I have a few issues with it. All right, many many many issues with it.

If I'm going to debate Mr. Beck, I'd better establish my credentials. My daughter and I have watched every single Glee episode since it premiered in the Fall of 2009. We watch them in real time; we replay them via DVR or online; we listen to the music; we buy the DVDs when they come out. We're "gleeks" and we're damned proud of it. Let's contrast this with my opponent. Beck told his audience that he's seen the show twice. Wow. The first season comprised 22 episodes. There have been 18 so far in the second season. Some quick math ... Beck has seen 5% of Glee's content.

Beck describes his experience watching Glee as a combination of "stunned horror" and "admiring awe." He's quick to point out that the show is "brilliant, brilliant." But in his mind, this simply adds to its ability to trash our values and corrupt our youth. Here are a few of his observations ... followed by a few of my own.

One of the remarkable things about Glee is its diversity — in fact, the series has received multiple awards for it. And, they don't stop at black, white, Hispanic, Asian. Or even straight, gay. There are characters who are conventionally pretty (head cheerleader Quinn, for example), but there are many more who don't quite fit the mold. This year, a new member of the glee club breaks the mold altogether. Wrestler Lauren Zizes isn't "big and beautiful;" the girl is unequivocally FAT. And, not only has she become a major character, she's captured the heart of McKinley High's sexy bad boy Puck.

What message are we sending our untethered children?

I don't think my daughter or her friends are going to gorge themselves to look like Lauren Zizes. But, if any of them do feel less than pretty, they now have a high-profile Hollywood happy ending in which the ugly girl gets the guy. Go Glee!

"Everyone is sleeping with everyone else."
Glee takes place in a public high school in Lima, Ohio. News flash, Mr. Beck! Some high school kids do have sex. But, just as in real life, some of the McKinley High School kids don't. In fact, there have been several story lines about deliberately choosing not to have sex (McKinley High has a very active — and sometimes musical — celibacy club).

One episode last year revolved around Madonna songs and included the 80s hit "Like a Virgin." The song was presented with cleverly edited ("brilliant, brilliant") scenes of different couples hooking up for the first time. But, of the three couples, two stopped before the act itself. The boy in the one couple that went through with it, immediately regretted it. Not only are these scenarios and decisions something I want my daughter exposed to, but Glee has opened the door to a lot of valuable conversations between us.

"There's no values; it's all self-gratification. It's a nightmare."
Wrong again, Glenn. If anything, Glee can get a little preachy with its values. Earnest Mr. Schuester, the glee club's endearing coach, teaches the kids a lesson every week. These have included self acceptance, empathy for others, overcoming disabilities, standing up to bullies, finding faith, not drinking ... the list goes on and on.

I, for one, am filled with "stunned horror" at what Glee has been teaching my daughter. Not.

Beck showcases one particular musical number (yes, that would be one out of the more than 200 songs performed on the show to date): the anthem "Sing," originally recorded by My Chemical Romance. He reads aloud the antiestablishment lyrics with righteous outrage. We have moved past renouncing valueless entertainment and into conspiracy theory territory. Now, this is getting silly. Clearly, the entire show has been created in order to poison our children's minds with a single liberal musical number.

All über vigilant things must come to an end. Beck wraps up his tirade about Glee and it's "brilliant songs and performances, brilliantly edited, brilliantly shot" (I'd like to add: brilliantly redundant) with a touching real-life story. Beck's "Chief of Staff" (excuse me, is he the President now?) and his siblings have all achieved amazing things because of a single incident. One day, they weren't doing their homework, so in a burst of superhuman parental responsibility, their tiny immigrant mother threw the television out onto the front lawn.

Maybe I should try that the next time my daughter won't do her homework.

But, then how would we watch Glee?

Posted by Alexandra MacAaron at 3:04 AM