Tween and Phone, Like a Moth to a Flame 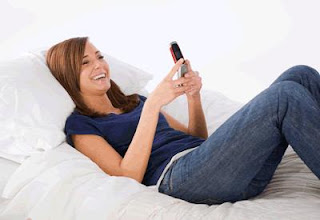 I'm a little bit concerned. All right, I'm quite concerned. Any loving parent would be.
My daughter has always been perfectly healthy and generally happy. We've had our ups and downs, our likes and dislikes, our triumphs and disappointments. She went through phases, certainly, but nothing too serious. Short-lived obsessions with a particular board game, the High School Musical DVD, bacon.
I never worried that she was in over her head. That things had gone too far. That she couldn't control herself. Now, everything has changed.
They say that admitting we have a problem is the first step, so here goes ...
My thirteen-year old daughter is an addict.
It's true. My daughter is addicted to her iPhone. Her connection to that slim 4 1/2-inch machine cannot be ignored. It is physical, chemical, emotional. It is bigger than both of us.
And she's not alone — although this doesn't give me much comfort. If I pick her up after "homework club," I see dozens of other girls with smart phones in hand, glued to their screens, thumbs moving miles a minute over minuscule keyboards, breathlessly catching up on everything they've missed while they've been subjected to forced phonelessness in school. These girls are surrounded by other girls, classmates, teammates, friends for years. But they can't be bothered with anything as old-fashioned as a face-to-face conversation.
They need their digital fix. And they need it, bad.
I see the same alone-with-my-phone-in-a-crowd behavior patterns when I'm carpooling. A sedan full of kids used to make for a fairly raucous ride. These days, I can have three tweens in the backseat and another up front, yet my car is surprisingly quiet. A quick glance in the rearview confirms what I already know to be true. The girls are fully engaged ... but not with each other. They're texting, playing games, listening to music, dipping in and out of Facebook or watching YouTube. Some afternoons, I confess, I welcome the peace and quiet. With three or four girls lost in their own cellular worlds, I can relax, unwind, listen to my own music. Which leads me to wonder ...
Am I an iPhone enabler?
Yes, blame it on me. It was my idea to give my daughter her own iPhone for her birthday. But, I had good reasons. She was starting junior high and would be walking to and from school without me every day. My agency had switched over to a group plan which meant I could take advantage of a discounted rate — she could have all the fancy functionality of an iPhone for about the same price as a plain old ordinary mobile. And, she already had my old MacBook so we could synch and share apps and photos and music. At the time, it made a lot of sense. It really did. And, I thought I could control it.
Foolish, foolish woman!
The first few months were fine. The phone was still a much appreciated novelty; it hadn't become a necessary lifeline yet. Then gradually it took on a bigger and bigger role in her life.
We've had rules about the phone all along. It's not supposed to be used before school except for a quick "r u walkn?" exchange between my daughter and a couple of other neighborhood seventh graders. It's not supposed to be used after 8:00 pm. It's not supposed to be used until homework is done. It's not supposed to be in her bedroom overnight. I would say that my daughter is fairly compliant, probably follows the rules more often than not. But, she's a tween and I'm her mom. My authority is ... um ... less than absolute.
Like any addict, my daughter's behavior is not always rational. In the evening, for example, we might be watching TV together. Assuming her phone is charging in the kitchen (where it's supposed to be), she may hear a text message coming in. She knows she isn't supposed to get up and get it, but she suddenly finds it impossible to sit still. Her fingers start to quiver, her eyes dart back and forth across the room. She tries to ignore it, but just as she's refocused on whatever show we're watching, the incoming text signal goes off again. She shoots me a hangdog look of dejected despair and practically leaps to the kitchen in a single bound.
Addiction is an illness, isn't it. How can I get mad at her?
If the phone is off or out of sight, out of mind, we still have to be vigilant. She'll just as quickly pick up my phone or my husband's. I can pretty much guarantee that there are no texts for or about her on my phone (sadly, they're mostly business), but she can't resist. Like a preteen moth to an open flame, she is drawn to any digital device within reach.
If she isn't near the phone she loves, she loves the phone that's near.
So what's a mother to do? Basically, I nag. I tell her, "Get off your phone," and, to her credit, she does. But, her memory is short and the pull of the phone is strong. I say, "Get off your phone," again. I say, "Get off your phone" a couple of dozen times in any 24-hour period.
There's no easy answer. This is one of those works in progress, I'm afraid. But, it's 8:20 pm and right now, I have to wrap this up and head downstairs.
I can pretty much guarantee my daughter's on her phone.
Posted by Alexandra MacAaron at 4:52 PM